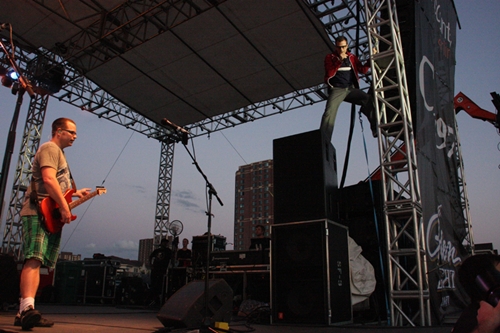 ...Before we get into the Minneapolis show news, check this out!
Weezer is playing a special Times Square live concert (broadcast on the NASDAQ and Reuters screens) with HP Live Beats on July 13. Fans can listen live by dialing in at 877.786.6652 (anyone can listen, but if you're in Times Square you can watch as well on the screens!)

We're also doing a re-tweet contest today to win passes to watch the show in person: Retweet the post from Weezer's Twitter account (the tweet will say its the one to re-tweet) and get entered to win. Rules below.

Rules: Winner will receive two (2) passes/tickets to attend the show on the 13th. Winner must tweet using the keyword #HPIntelLiveBeats AND the link to the show details. Winner must be following @HPIntelLB at the time of the drawing. A random Twitter user who has met the preceding criteria will be chosen at 12 noon on July 12th, and notified on Twitter via Direct Message. Winner & guest must be 18+ years of age and provide valid identification.

Todays weezer show took place on the first of the two days of the Basilica Block Party, which was held in downtown Minneapolis right next to the freeway on a blocked off section of roads and dusty vacant lots, across the highway from the domed basilica that it was held in support of. A ton of people came out on this fine day to rock out strong. Its been a good while since we've been in Minneapolis, and the people seemed really primed to get some weezer in their systems. A glorious mutual freakout! Its always a plus when the energy on stage and in the crowd is well matched.
i...f you were there, post your tale!