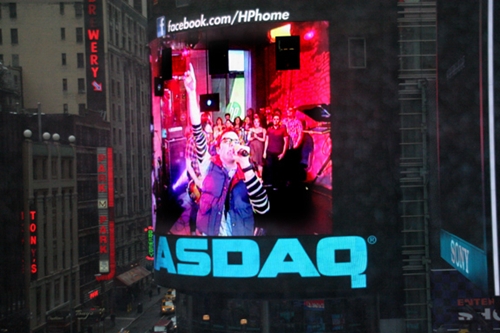 Don't miss Weezer's HP Live Beats concert and interview session today! We’ll be performing in The Reuters Studio and it will be live streamed to the NASDAQ and Reuters billboards in Times Square. Be at 7th Avenue between 42nd and 43rd at 2:15PM to watch our show. Also, bring your cell phones to dial in and listen to us - just check in on Foursquare to #HPIntelLiveBeats to get the phone number!

Not in Times Square today? Watch the live video stream of the show here!

(later) well, a nasty monsoon blew through Times Square right as we were setting up, so as the show started there wasnt quite the crowd that was expected and things were looking kinda grim out there! But fortunately the rain soon started to let up and as the band ran through their short set and interviews, more and more people gathered to watch the band on the 5 story Nasdaq and Reuters screens, and listen in on their cell phones. After the show, Rivers did interviews with Reuters News and Time Magazine, and then we bid adieu to the Reuters offices and the HP peeps.

were you in times square? Post your story here!