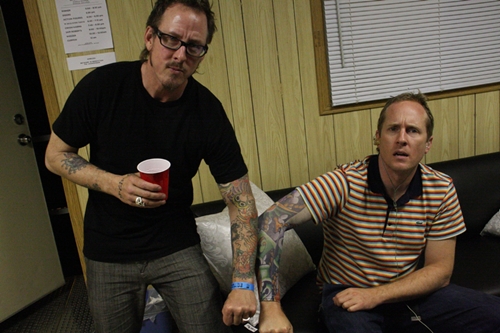 ...Today is one of those "Planes, Trains, and Automobiles" kind of tour days, where due to the logistics, we have to get up at the crack of dawn, go to the airport, fly to Detroit, get on the bus, cross the border, and drive onward to Sarnia ...and then do the Sarnia show. Thats the way it works sometimes! As I write this, we are enroute to the border crossing, and everybody is either napping or looking like they need one! By tonight hopefully everyone will be recharged and ready to rock again!

Well, the rock was brought to Sarnia, just a bit later than anticipated. Some sort of delay prior to our arrival on the scene set everything back an hour or so, so adjustments were made and we soldiered onward. Here and there the band wrestled with some random equipment mysteries but everything worked out fine in the end, with a raucous Sarnia crowd urging the guys into the requisite rock power moves. This was weezer's first time ever in Sarnia, we've never been here before. As a matter of fact, July is chock full of Canadian weezer firsts: Ottawa, St Johns, and Halifax. Later in the month will be the first Montreal show since the co-headline with the Pixies back in 2005. Everyone is feeling the mutual Canadian love. In that spirit, post show, a bus screening of the new Rush documentary was required watching for some, as midnight passed and Scott's birthday began.

...REMINDER:
Weezer is playing a special Times Square live concert (broadcast on the NASDAQ and Reuters screens) with HP Live Beats on July 13. Fans can listen live by dialing in at 877.786.6652 (anyone can listen, but if you're in Times Square you can watch as well on the screens!)