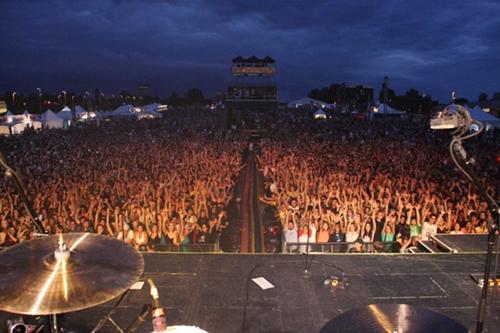 ...After an 8 AM border crossing roust from bus-sleep, we rolled on into Northeast Ontario, to the sunny and quite pretty city of Ottawa, the center (centre) of Canada's government, and home of an annual blues festival. Weezer is not a blues band (well, not at first glance anyway), but thats sort of the nature of these festivals nowadays - they take on all sorts of acts. For example, back in Sarnia, the festival's "country night" was headlined by the Black Eyed Peas, which is quite a stretch.

Well, this was Weezer's first ever show in Ottawa, so we expected some pent up excitement, but this Bluesfest crowd took things over the edge! It didnt hurt that Rivers was fully in explorer mode, checking out every corner of the facilities as he sang, stoking people up who were nowhere near the stage. Or maybe it was just the fact that it was the closing night of the festival and people were ready to let loose. In any event, that was a fun, wild and crazy show by everyones standards. Good jam!

Big ups to Mike Young, longtime fan and 'SFTBH' researcher at the show tonight. Like the other Ottawa fans, he was waiting a long time for this show.