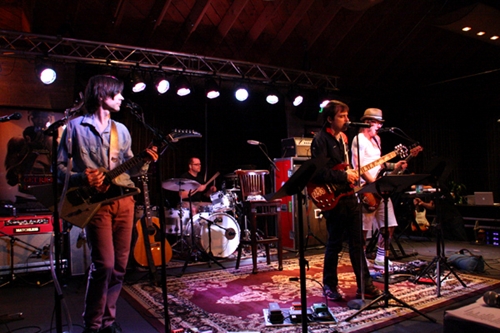 ...And the first single off the album is titled "(If you're wondering if I want you to) I want you to" and it comes out on August 25th!

...And here's another cool thing: on August 22nd in Toronto, the day before the 1st show of the tour, Rivers will be making a special appearance on the field in Athletes for Africa Charity Soccer Tournament!

Rivers is really excited to be playing in this match. He's played in the last 2 Mia Hamm and Nomar Garciaparra Celebrity Soccer Challenges in L.A. and this match promises to be just as fun. For this match, Rivers is a member of The Mystery Team, which also includes Ted Leo, of indie-punk band Ted Leo and the Pharmacists; Murray Foster, of folk-rock group Great Big Sea (and of Moxy Fruvous fame); freestyle soccer whiz Steve Elias and founder of Athletes for Africa, Adrian Bradbury. They join Broken Social Scene’s Brendan Canning, Bedouin Soundclash’s Eon Sinclair, former MuchMusic VJs Rick ‘The Temp’ Campanelli, Tony ‘Master-T’ Young, Sportsnet’s Martine Gaillard, The Score’s ‘Cabbie’ Richards and James Sharman, Toronto musician Dane Hartsell and many more, in the first-of-its-kind event, pitting celebs on the field against members of the public.

...Today the band continued their rehearsals for the upcoming tour with Blink-182. Some cool new material was gone over extensively and the whole set was run through multiple times in an effort to root out any problem areas. The process is going very well and continues tomorrow.

...here's a neat piano/organ version of "We Are All On Drugs" courtesy creative weez fan Anders.

...and here's a cool fan video for "Island In The Sun" by Natasha T.: "I recently went on a backpacking trip through Costa Rica for three weeks. During my time there, I was able to record the various locals and travelers I met along the way singing "Island in the Sun". This is the most ambitious project I have ever undertaken and wished to share it with the world, and Weezer."