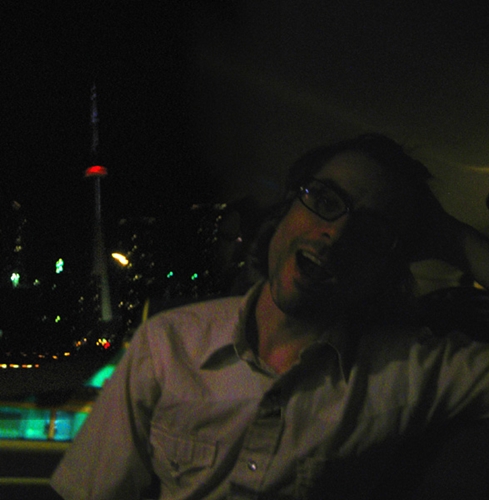 ...Friday started the exodus, movement of Weez pepo from the SoCal environment to the Bl-eezer(?) Tour Environment, namely Toronto, Ontario. Which is yours to discover, and you're gonna love it, in On-tar-i-oooo. It was a long day of travel not helped by plane delays. Sleep deprivation, the #7 breakfast meal at Burger King (hold the ham), and the pitter patter of feet of all sizes - that spells airport.

Thanks in part to your requests, 22 radio stations added the single in its first two days including stations in LA, SF, Seattle, Boston, and Phoenix. On L.A.'s KROQ, the song is rising fast on their "Furious 5 at 9" and the DJ gal sez "I'm absolutely in love w/ it - totally smitten." (hat tip: EG). Meanwhile a funny story from KFMA.com in Tucson, AZ, where the single has been winning the 'Rocktagon Cage Match', before they were even sent the single. Apparently they were playing an mp3 that a fan had made and sent them! Pretty cool! They have since been serviced with an official copy.

...now see this, Rivers did an interview with Billboard, the results of which are now online. Amongst other things, another song title from the upcoming "Raditude" was made public in this article, namely "Trippin' Down The Freeway", which was recorded last winter and is quite dandy, one of my personal faves from the upcoming album. Also mentioned was the Pinkerton Deluxe Edition, which does not have a release date yet.

...if you havent seen the new Weezer Webisode #16 yet, its on our YouTube Channel. 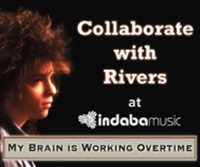 ...REMINDER: SATURDAY AUG 22nd in Toronto, the day before the 1st show of the tour, Rivers will be making a special appearance on the field in Athletes for Africa Charity Soccer Tournament!

Rivers is really excited to be playing in this match. He's played in the last 2 Mia Hamm and Nomar Garciaparra Celebrity Soccer Challenges in L.A. and this match promises to be just as fun. For this match, Rivers is a member of The Mystery Team, which also includes Michael Cera (just added!), Ted Leo, of indie-punk band Ted Leo and the Pharmacists; Murray Foster, of folk-rock group Great Big Sea (and of Moxy Fruvous fame); freestyle soccer whiz Steve Elias and founder of Athletes for Africa, Adrian Bradbury. They join Broken Social Scene’s Brendan Canning, Bedouin Soundclash’s Eon Sinclair, former MuchMusic VJs Rick ‘The Temp’ Campanelli, Tony ‘Master-T’ Young, Sportsnet’s Martine Gaillard, The Score’s ‘Cabbie’ Richards and James Sharman, Toronto musician Dane Hartsell and many more, in the first-of-its-kind event, pitting celebs on the field against members of the public.

...you gotta watch this great (though still unfinished) animated fan video for "I Just Threw Out The Love Of My Dreams"! (hat tip: Chad)

..."Holiday" was recently the "travel song of the day" on Worldhum.com. With vintage '00 live footage.