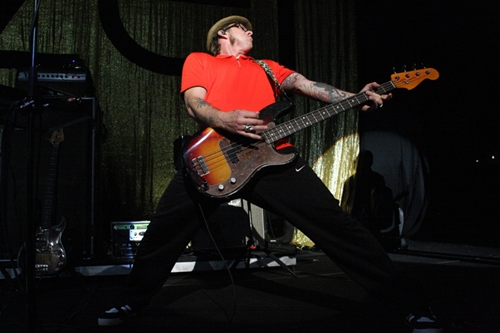 ...Well we're in the leafy wild woods of The Shire, AKA the backstage artist's area of the Virgin Free Fest, and it's a beautiful day indeed. A zillion bands are playing today including tourmates Taking Back Sunday and Blink-182, and Public Enemy, Jet, The Hold Steady and many more. Fun times! The crowd was HUGE and it really felt like a headlining show today for weezer, as the people simply went ape-doodoo during weezer's set. All in th weez camp agreed that this was the peak of the tour so far overall.

Also apparently the head of Virgin, Richard Branson parachuted in and shot t-shirts into the crowd out of a t-shirt cannon. What can beat that?

A round-up of recent interviews and articles:

...Scott interview with the Baltimore Sun

...Mtv article on 'Raditude' with Brian