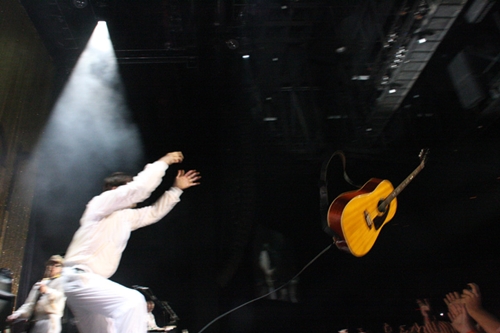 Down, down, down the New Jersey turnpike again, to Philadelphia's young, freshfaced neighbor Camden. It is time for the third in the trifecta of rock that is the "3 shows in a row" phenomenon. Everybody is full of vim, and vinegar too. These are the ingredients of Rock Salad. So bring a towel - 'cause its laid out like that.

Philadelphia has always been good to Weezer since the earliest days of touring in 1994. Sine this tour is not a weezer headline tour, it separates the faithful fans into two camps (both faithful) - those who want to see the band under any circumstance, and those who are willing to wait till the chance comes when weezer is headlining. So you get these massive crowds, but you get a sense that those who came only for weezer are a bit outnumbered by those who may like weezer but also are there for Blink's extravaganza. The crowd tonight was therefore a bit more subdued than the typical Weezer Philly crowd we see, but still more active than some of the recent shows where the seats go right up to the stage, which excludes any chance of a good old fashioned crowd surf. The spirit was there tonight, and if anyone in view of the stage was skeptical, they seemed to be converted by the time weezer was done! A tight, driving set, plus men and objects flying through the air. That's the way to do it. You get the guitar on the Mtv.