From Weezerpedia
(Redirected from Jason)
Jump to: navigation, search

Jason Rosanoff Cropper (born June 27, 1971 Oakland, California) is a founding member and the original rhythm guitarist for Weezer. He later went on to front the bands Chopper One and Fliptop, eventually pursuing his own solo career as a musician and producer. Cropper first befriended his future Weezer bandmates through mutual acquaintance Pat Finn.

Cropper claims to have picked up the guitar at age sixteen. His mother reports that he first "rocked" to a small 45-RPM record in his bedroom where he played "Let's Go To The Hop" by Danny and the Juniors at the age of two. He used to spend hours, as a very young child, listening to "Tommy" by The Who. He has never openly admitted what the first record he bought was, but claims his first "cool" album was Jimi Hendrix. He was a fan of various genres, like psychedelic, grunge, and punk. He was in various bands in his twenties before joining bands that contained the core members of what would become Weezer.

In early 1991, Cropper joined the NorCal funk jam band The Brotherhood Groove Grand Junction, but in spring 1991 he moved to Los Angeles with Pat Finn, who had befriended him during Finn's several month stay in Petaluma California. In early 1991, Finn's band Bush was missing guitarist Tom Gardocki (who, by that time, was a full-time member of Wax) and Cropper was invited to fill in. Upon arriving in Los Angeles, Cropper helped form what would become 60 Wrong Sausages, taking up the role of guitar.

Cropper soon got a job with Patrick Wilson selling luxury dog shampoo as a telemarketer in Westwood, a job that was inherited from Matt Sharp, who had just moved to Northern California. The company went out of business three paychecks later. A new company bought the facilities, and according to Cropper:

Cropper then assisted Rivers Cuomo in getting a job as a dishwasher at the restaurant, but neither of them lasted there very long. 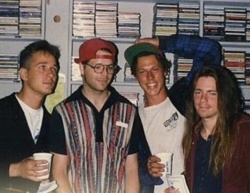 Meanwhile, by June 1991, Cropper, Pat Finn and Pat Wilson were all spending lots of time with Rivers Cuomo and began to form 60 Wrong Sausages. They convinced Cuomo to join them by late summer 1991.

When 60WS disbanded, Cropper joined what would become Weezer. Originally, Cropper's role was acoustic guitar and backing vocals, but as Weezer's sound shifted Cropper set down the acoustic guitar and picked up an electric to play rhythm. Cropper used his strong fingerpicking skills to solidify a rough idea by Pat Wilson and create the famous intro guitar part to My Name Is Jonas while living with him at their apartment on Stoner Avenue.

While Weezer was recording their first album, Cropper's girlfriend became pregnant, and he subsequently left the band. Although the exact details are clouded in legal documents, it is most likely that Cuomo and Sharp asked Cropper to leave because everyone felt anxiety about his girlfriend's pregnancy and Cropper's resultant increasingly erratic behavior at that time. Cropper left on fairly negative terms and had little to no contact with Cuomo for over a decade, though he and the rest of the Weezer members reconciled by the time of Rivers' wedding in 2006, and remain on good terms today.

In 2020 Cropper stated the following about his departure from the band:

The song Cropper wrote alongside Cuomo and Wilson in 1993, "Thrown It All Away" was later rerecorded and released as a bonus track on Van Weezer in 2021.

In 1993, Cropper became part of the original line-up for the short-lived band, Campfire Girls and performed during the band's inaugural concert at Delongpre in Hollywood, California. Cropper then became the original guitarist for 22 Jacks in 1995; writing and recording songs for their first album, Uncle Bob. He left before the release of the album to form a short-lived band with his then-wife, Amy Cropper and close friend, Darrin Pfeiffer called "Braxton Hicks" [1] (named for womb contractions experienced during pregnancy). After drummer Darrin Pfeiffer left to join the alternative-ska band, Goldfinger, Cropper and his wife formed Chopper One.

Cropper with Chopper One

The band signed with Restless Records and released an indie single in 1995, and wrote and recorded a CD of original songs in 1997 titled, Now Playing. After the mild traction gained from releasing Now Playing, Cropper began writing songs for a potential second Chopper One album, including the song, "A Punk Named Josh". The song was released as a single and gained success briefly as the number one alternative rock song in Australia. Due to increased spending, Restless Records did not have enough money to record and release a new album specifically for Chopper One, causing them to re-release Now Playing in 1998 as Chopper One with a different cover and including the new single, "A Punk Named Josh". The ill-mannered treatment Cropper received from the record company encouraged him to move on from Chopper One, leading to the band's disbandment.

In January of 1994, Cropper and his wife Amy had their first of three children, a young girl they named Kiefer Rain Cropper. Their son, Jake Hudson Cropper, was born in 1999, and their third child, a daughter, Devon Jade Cropper, was born in 2001. The couple divorced circa 2004-2005, but live near one another as they co-parent their three children.

Cropper began his work as a producer at Ocean Way Recording Studio in 1997[2]. In the late 90's he helped produce songs with an up-and-coming band named Ozma. Sadly, supposedly, all of the tapes from their sessions together were lost. In 2001, Cropper participated in recording the Incubus album, Morning View[3].

Following the dissolution of Chopper One, Cropper helped to form the short-lived band Fliptop in 2000 with Chopper One alum Dallan Baumgarten, in addition to bassist Scott Shiflett and drummer Josh Freese. The band produced one unreleased EP and is known to have performed three concerts.

Cropper provided vocals for the theme song to the short-lived television series, "Andy Richter Controls The Universe", which premiered in 2002.

In 2004, while Rivers Cuomo was taking up meditation, he sought to make amends with everyone with whom he felt he had done wrong, including Cropper, and the two became friends again. Cropper attended Cuomo's wedding in 2006.

in early 2006, Cropper built a home studio and began recording himself and other locals, such as Buffalo Alice, whose second album "Mitchell" (2007) he produced. He also has writing credits on at least one song and is created as playing guitar and singing on several songs. He later produced the band's third album, Alexander Rosenhoff Testament: A Work of Fiction, released in 2009. Over the course of two years Cropper wrote and recorded songs for his first solo album to be released in 2008, but for unknown reasons the album was scrapped and the recordings were lost for several years. However, a song written and performed by Cropper for the album, "She'd Be Good for Me", appeared on the compilation CD Guitar Center: Fresh Cuts Vol. 4 in 2009. Cropper was, at the time, employed under the title of "GC Pro Account Manager" at Guitar Center West LA. The Weezer demo "Everybody Go Away" was also featured on the compilation.

On March 25, 2017, Cropper shared pictures of his previously unseen shared studio space, Studio C, and on both June 30 and July 16, he shared photos of himself in Studio C recording alongside others. In April, producer Michael James shared an Instagram video of himself with Cropper working his forthcoming album [4]. In 2018, Studio C was used by Cropper to record and produce Brian J. Kenny's album, Topical Tunes for Troubled Times. In July of 2020, Michael James released the song, Color of My Skin, featuring Cropper on lead vocals. 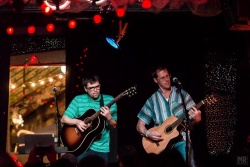 Cropper joined Cuomo on stage at a solo acoustic concert with Cuomo at Bottom of the Hill in San Francisco on May 9, 2018, performing guitar and backing vocals for "In the Garage" and "No One Else". Cropper joined Cuomo again at a show at August Hall in San Francisco on September 12 of that year, performing seven Blue Album-era Weezer songs, as well as a cover of "I Still Wanna Know" by RAC (a song Cuomo co-wrote). In an interview with AllDayVinyl on August 27, 2020, Cropper recalled that at the second show Cuomo whispered to him that he was "a really good musician" and that it was the impetus for him to start writing songs again.

On November 22, 2019, Cropper played an inaugural concert as The Jason Cropper Band alongside Brian J. Kenny and Rob Ahlers. Cropper's new material for his solo album was played live for the first time, as well as covers of Weezer songs. In late 2019, new and never before heard demos were uploaded to Cropper's SoundCloud account. One of which would later be reworked and released as his second single "Perfect Dream (Rivers Sing Your Song)". Cropper stated that his upcoming album would be finished and released sometime in 2020, but the album's release would later be postponed due to the COVID-19 pandemic. Beginning In May of 2020, Cropper began hosting his own weekly virtual livestream of "The Golden Hour" to his Facebook and Instagram followers, in which he performed acoustic songs, including covers as well as his own new material as a way to connect with fans and friends during the COVID-19 pandemic. Later iterations of The Golden Hour were performed alongside Kenny and Ahlers inside Studio C.

Cropper released the first single for his forthcoming solo album, "Goodness Knows" on July 13. Over the course of over a year, Cropper would release a total of four singles in support of his album.

In January of 2022 Cropper came in possession of the lost recordings from his 2008 album. On March 25, 2022 the songs were digitally released as Cropper's first solo album, Songs from 2008.

As a solo artist