...so far there have been some conflicting reports from the first two "Hooptie Tour" shows. While most people from San Diego reported a good show and fun (if somewhat rushed) autograph signing session, the reports from Phoenix are mixed with some tales of woe. I dont have the report back from the band on what happened in Phoenix yet, but I do have some San Diego pics from Dan the Lighting Man, and some interesting fan reports from both shows.... 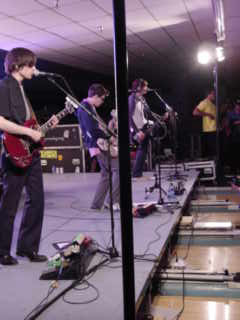 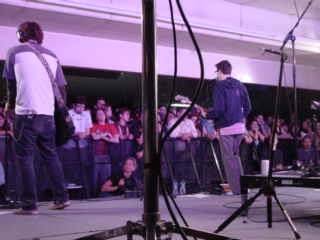 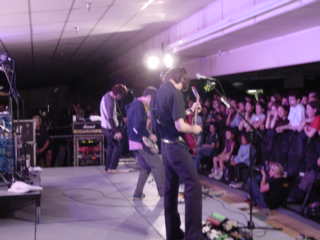 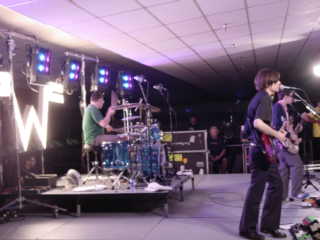 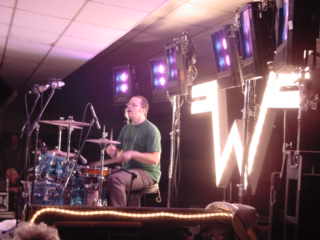 "I was at the 91X Weezer bowl yesterday, and damn was that good!(I called in about 20 times!) It was a great live show we were so close to the boys it wasent even funny.They played the whole new album minus "o-girlfriend" and "smile" The rest rocked! it was unbelivable! I waited and waited for so long to hear the new song Legally, because i think its wrong what these people are doing with the CD-R's. I should have pictures soon, but it was so jammed packed they placed the stage on top of the bowling lanes! it was awsome!!later we waited in line after the set and got a pickgard signed by the boys but the coolestt thing was that they were pre-selling the "green Album" and they gave us the front cover sleeve so they could sign it! it was great all we have to do know is pick it up on the release date." -one more loyal weezer fan -Rudy Banuelos (san diego, CA)

"I didn't bowl, however, the show was awesome, and the new songs sounded better than any of the other times I've heard them performed live. Seeing the band set up on the lanes was hilarious. I noticed that the bowling alley employees were watching very closely that no one stepped over the foul lines. Before the band came out, my friend and I had found a decent spot to watch the show from. As we waited, and waited I kept peering over my shoulder to see if the band was coming yet. At one point I realized that I had been standing in front of Scott Weiland! Yah, I freaked. But I kept it all inside and stayed inconspicuous. Of course I met him later in a nonchalant manner. Personally I think he's kind of a d**k. Not like my Weezer boys. They were sweet as pie, signing hundreds of cd's, tshirts, titties, and bowling pins. I was lucky to have barely made it into the "meet and greet" line and waited at the butt-end ever so patiently, just so I could get shuffled through so quickly that I didn't have even a second to b.s. with the guys (probably better that I didn't, since I've made and art out of making an ass out of myself). But they were very gratious, kind and completely made my day. Hope to see you at the next Weezer show I attend." -Valerie

"I won tickets this morning by doing Human Bowling at the radio studio, and we got there super early and discreetly followed Brian around K-Mart while he looked at home cleaning supplies and hand towels (oooook, Brian..hahaha).... The show was awesome! But the time it took them to hit the stage was a bit much... we were all standing there for about an hour and 15 minutes... But they did a GREAT job and they had me singing along the whole time...hahaha... I took tons of pictures and bootlegged the show (even though you weren't supposed to do either one..hahaha) and I got autographs from the guys after the show... Twas very cool... I'm hoping to do it again next week for the record release party... whoo!"

"it was a good show, albeit short. i guess that's what promotional tours are for, to whet peoples' appetites. it was kind of hard to see them unless you were standing directly in front of the stage. the ceiling was low and the stage raised a bit, so all i saw were the guys' heads. the sound was excellent, though, and i believe the whole set was new stuff from the green album. i can't wait to hear it. afterwards, there was a meet-the-band thingy, and they signed a lot of autographs. props to them for that. i came back with an autographed bowling pin. all in all a pretty good time, aside from all the long lines for everything. " --jay

"i never did any actual bowling, but many people did. It started out with a short set from the guys, in which they played only songs from the new album, all except Smile and O Girlfriend. The songs sounded really great, it was my first time hearing most of them, and now i'm really, really exited about the new album. I think they got a good reception from other fans too. After the show, people could bowl, or get in line for an autograph signing. You could pre-order the green album there, but they only gave you us the booklet for now, we have to wait till next week to pick up the actual album. Most people used to get signed. Weezer were in good spirits and were very friendly. I got to shake Rivers hand, so i was happy. All in all, a great night! " -Craig Barclift

"everyone at the show was supposed to get to meet Weezer, right? Wrong. People were supposed to be called up to meet the band by the order of tickets, right? Wrong. Weezer only played a 20-minute set consisting of all new songs, which was okay since I was there to meet the band. I obediently listened to the organizer’s directions in proceeding into line, and guess what, I was never even allowed to stand in the damn line. Weezer’s manager stopped people from getting in line and had security form a wall, which past no one was to go. So, I spent 15 hours, of which I could have been working at my internship for $15 an hour, which totals out to a loss of $225 working. I then spent an additional $40 on stuff I was planning to get autographed: $265. That’s fine, I was supposed to get to meet Weezer, right? By my understanding, the purpose of this free tour was to support the release of The Green Album, and to reward the fans. I can tell you, this definitely was NOT a rewarding experience."

"i am so glad that i had the chance to see the brosephs while they passed through. i skipped school to go to the autographing thing at hoodlums. well worth it. the guys were rad, and they were nice to all the raging fans taking their pictures and hounding them with posters and what not for signatures. the show was cool, they played various new songs such as island in the sun, crab, hash pipe, dont let go, knock down drag out, and a couple more. it was cool, but the crowd was quite disappointed that they didnt play a bit more considering the hoopla that the radio station created. the songs rocked (though i think there were only 8), the show was rad and i'm sop glad that i got to see them!" --david pearson

"my friends and I were subjected to a 20 minute set of Weezer with no opening bands. Despite the fact that the Edge promoted it as a "FREE" show at Rawhide in Scottsdale, Arizona, most people that I know and everyone else chanting "Bullsh*t", paid $8.50. I hope that Weezer knows that they have a very truthfully loyal fan basis and that this hurts them very much. I myself play and in a band and would never put my fans under money. If you weren't aware of the situation, I'm sorry you're music has been stolen by corporations, otherwise I hope you see the point of holding onto your fans before they ditch you for the newest craze. Please don't take this as angry, only slightly confused."

"this may be some sort of explanation for what went on tonight. You see phoenix got screwed out of the yahoo outloud tour and we were on the list and when we were scrapped off many people got angry, but when you announced this show everyone was excited and expected a show (doesn't matter if we paid). Many people didn't feel like we got a show. We got 5 or 6 songs and one song off the old album. I also believe that is why no one was really in to it. They didn't know the words, thats why they needed to play more songs off there old album. Well i know you guys are probably pissed but I hope we wont get scrapped from your next tour."

...a word to people going to these special promo shows. These shows (aside from the big radio festivals) are not ordinary shows. I've heard reports of people hearing on their radio station one thing, then getting something entirely different at the show. These are short shows, 7-10 songs for the most part. The meet-n-greet/autograph signing events are bound to be somewhat rushed, due to the radio stations stuffing too many people into the gigs. In San Diego, for example, there were 700 kids in the bowling alley, and there were supposed to be no more than 400. Also consider that the band is touring with a minimal crew, and the radio stations seem to be hiring out the bare minimum of security, which puts added stress on the band and crew. Please consider these things, and compare what weezer has agreed to do with whatever the radio station is promising. A little extra patience and understanding will make these things more fun and less stressful for everyone involved.

...Weezer will be on VH1's Top 100 Greatest Videos, and Buddy Holly is #27! It should be on around 10:30 on Thursday Night. It's on after Bob Dylan's "Subterranean Homesick Blues" video

...Pat Wilson's phone-in interview on a Georgetown college radio show has been postponed to 5/15. To listen online, assuming the link is operational, you can go to this link tuesday 5/15/01, from 8pm-10pm EST.

...Joe, a fan, sez: "I find it apalling that N'Sync dares to release their new single the same day the Weez's album is released. It spits on the face of the alternative scene, which has calmly waited for its moments in the sun. I consider Green Album to be one such moment and theyr'e going to ruin it now. Just thought I'd vent a little. I think its horrible that they're going to be the talk of the day in music. It should be Weezer's day. You have my full support that the Catonsville area will be living Weezer day, not N'Sync day!"