...Due to some very tight scheduling, the second the "Punk Rock Prom" was over, everyone had to rush down to LAX to take the "red eye" flight to New York overnight, and pretty much go straight to the NBC Studio when we landed this morning. Needless to say, hardly anybody got any sleep at all, and then the crew had to set eveything up and the guys had to play the two songs numerous times so that the camera operators and other SNL staff could sort out how they were going to film the segments live tomorrow. No one was complaining, mind you! Doing SNL is pretty cool no matter how little sleep you get. Plus we got to meet both Christopher Walken and Will Farrell, which pretty much tops off any day. The guys sounded tight, and after the numerous rehearsals, they were pretty much accustomed to the famous stage and looked ready to get the job done tomorrow. For now, everyone went back to the hotel to take naps. 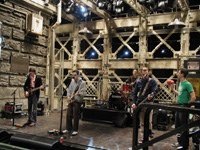 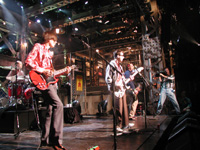 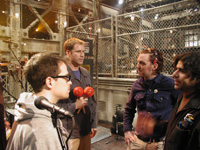 ...the other day (5/16) me and Pat visited the web people at Geffen to check out what was going on over there. We stumbled upon a little web cam which we were informed was live! We had them leave a message on the message boards to come check it out, but it looks like only a handful of people caught the action. We managed to save 2 clips of this rather silly nonsense, and the links to the clips are here: clip 1 and clip 2. NOTE: these are 100k clips, sorry thats all we could get. So for optimal viewing you'll need Media Player 7 (it will automatically upgrade your W.M.P. if you want it to) and a broadband connection.

(note the reports from 4/10-5/4 have been moved to the Fans' news pages,
which will be back shortly (if you bookmarked them before I think theyre still accessable...) (and see 5/12 below for part 8)
Want to request the song from anywhere in the country?
A fan has set up a handy Radio Station Contact List Page with phone #s and email links to many stations nationwide!

• Channel
One played a clip from Island in the Sun before to the
commercial break yesterday. Incase you don't know what the
hell I'm talking about, Channel One is like a "teen news"
thing that is shown in high schools (and middle schools?)
accross the nation.
• Hash Pipe is the #1 Most Requested song on WBCN radio in Boston, and they always say that it kicks ass
• CD101 in Columbus, OH has been doing "double exposures" of the new album. So far I've heard "Hash Pipe" & "Simple Pages" and "Hash Pipe" & "Photograph."
• Maine's WRBC 91.5 FM Top Thirty List for the week of the
thirteenth...Hash Pipe is number one!!! Up from number seven on last week's
list...Which means it's getting a lot of airplay on college radio, or at least
our college station
• here in Australia. Fox's music channel, 'Channel V' had made "Hash Pipe" this
weeks "Ripe Clip of The Week", which basically means its on high rotation.
Also, "Hash Pipe" was at number 41 on Triple J's Net 50 for this week, anyone
can vote from anywhere to see it higher at:
http://triplej.abc.net.au/net50/default.htm
• Tonight on 89X (Detroit MI) Hash Pipe was #1 on the Top 9 at 9.
• , in Auburn,AL, they were giving away copies of the Green
Album somehow.. Whenever they played Hash Pipe, the 9th caller got a free
copy of the new album.. they must have played it 10 times. it kicked ass but
i never won.
• The radio station 105.9 Lava Rock played the whole album on Friday. After
that, they were giving out cds and got back to playing sh***y music.
• I'm in Western Mass and listen to 102.7 (WEQX) from Southern Vermont
which I know you've already gotten updates about. They like hash pipe and
usually talk about the band after they play it. They were also supposed to
do a new music show a little while ago which was to have some other songs
from The Green Album, but I think i missed it.
• Just a quick note to say that Hash Pipe has moved up 21 places in the
weekly net 50 to #20.
tp://triplej.abc.net.au/net50/latest.htm
• I didn't know if you knew this or not, but they announced on y100 that
Weezer is in the "Cage Match Hall of Fame"
• weezer is now #1 again on the people's choice countdown on 97X
in cincinnati area