...well I tracked the guys down in a huge weird office complex where AOL does whatever it is they do, and after sitting around in a dressing room for a bit, the guys did a live chat on AOL. Everyone was in good spirits, but as seems to be par for the chat course, lots of good questions were missed and the moderator couldnt always interpret the questions well. Fans have reported poor live video feed and in many cases no audio at all. Fortunately I audio taped the whole thing, perhaps some mp3 clips?

The funniest thing i noticed was that the AOL typer didnt understand some of the guys answers too well. When the "Dungeons and Dragons" question came up and Rivers went to explain he once ran "Elven" and "half-Elven" characters as a youth, the transcript read "Elephant" and "Half-Elephant". Now that sounds like a fun game!

...later, Rivers, Mikey and I wandered down to the Hollywood Tower Records on Sunset to soak in some of the "Knock-Down Camp-Out" vibe. We found that while Tool and REM buyers were going in at midnight to pick up their new CDs, weezer buyers had to wait till 9 AM Tuesday, making it a true overnight camp out! This was due to the special pass thing that the first 325(?) buyers were getting to see tomorrows in-store performance. Tower needed to keep things organized, so they delayed the Weezer release till first thing Tuesday. Apparently they are setting up a Jumbotron out in the parking lot for the next 250 or so people to watch from outside, after the initial 325 go in. We chatted with fans and took photos and such, it was pretty cool! Rivers made it a point to go around the whole parking lot (the line was already at least 300 people or more), and talk to everyone in line! 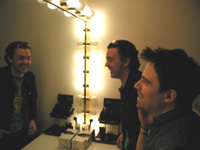 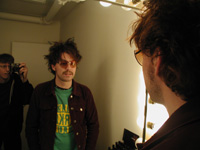 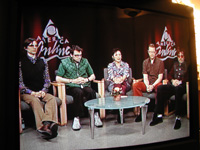 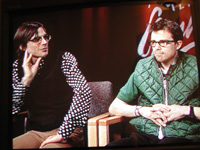 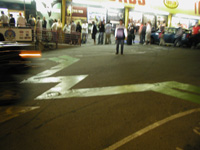 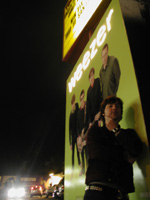 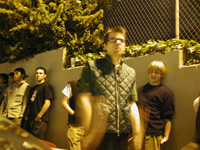 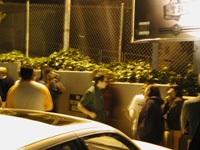 "just thought I'd pass on some info on the scene here in central Iowa. At the Musicland in the Ames mall, there was a crowd of about 50 - 60 people gathered for the midnight opening. A few were there for Tool, even fewer for REM, and the majority were there for weezer, not bad since ISU dismissed about a week and a half ago. Any ways, there were planty of Weezer albums to go around, most of the crowd had there's on reserve. Anyways, I thought the coolest part of the night was the mini pro-weezer chant on the way out, it went weezer rocks, f*ck REM, weezer rocks, Tool sucks, etc. pretty simple but it didnt seem to catch on with too many of the customers, and was short lived. Also, the Musicland here in Ames opens up every Tuesday at midnight for the hardcore fans, and this was by far the most people I've seen at one o these events."

"SUCKED ASS. it was held late at 11:30. I went with my older sis and her friend. like 10 people showed up. 2 brought acoustic guitars. they played =w= songs but they sucked at it. since there was no stereo I offered to blast music from my car so everyone could hear and singalong and the guitarists could play along as well. I asked them what songs they knew and then when a song was decided upon they just started playing before I could get the track on and made everything completely off. it was as if they were insisting "no you guys can only sing along to our guitars and we only know how to play 2 weezer songs so too bad." what's the deal?? they were being really retarded so I said "fudge that" and I blasted "You Gave Your Love to Me Softly" and drowned out those shady motherfudgers. other weezer fans there appreciated "the real thing." "

"we had a rad turnout for the maryville, tn chapter of the knock down camp out. i was honestly a bit worried about the turn out but there were about 50 in attendance. the schedualed "tool midnight release" quickly turned into a "weezer midnight release". the band "Red Johnny and the Roudmen" setup out side of the store and began to play their weezer covers. they were quite rad. great equipment. they got through "my name is jonas", "the sweater song", and "waiting on you" before the cops showed up and shut the whole thing down. down with law enforcment!!! the cops said somthing like they had gotten 45 complaints in less than 15mins and indeed the rock was stopped. the crowd rushed in and at midnight sharp were allowed to get the new green album."

"I got home from work at 8:30 and reminded my friend Brian that tonight was the night that Park Ave. Cds in Winter Park, FL was having their big Midnight Sale for all of the new releases for May 15th. We showed up at around 10:30 and there was already a small crowd of people gathering around this tiny little record store on a quiet street in a quiet, private university town. By the time the doors opened at 12, the line was down the street and wrapped around the corner of the block. Needless to say, there was an interesting popourri of people outside, from the pleather-clad Tool kids to the preppy kinda R.E.M. kids. The vast majority of people, however, were there for the Weez. Unfortunately, they were only letting five people inside the store at a time, so it kinda took a while to get in, but once I did, I bolted straight for the counter, presented my 20 spot and said one word: "Weezer." The man behind the counter slammed the lime green treasure down on the counter (complete with a new Weezer sticker), gave me my change and said, "There's stuff at the table in the back." I figured it would just be propaganda for some lame DJ that they would have performing in the store sometime soon, but decided to take a gander anyhow. When I got there, I was shocked to be hearing someone say, "Do you want a poster or a shirt?" Now, the poster was tempting, a set of hands making a "W" in front of a crowd of people, but the idea of getting a free Weezer shirt was...well, it was the bomb diggity. So I said dumbfoundedly, "A shirt, please." They asked me my size, I told them, i got my shirt and walked out of the store, grinning from ear to ear. We got in the car, popped in the CD and listened. " 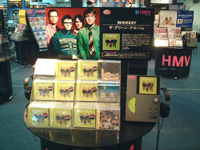 I repeat: weezer is NOT doing Leno this week! they are doing SNL theis coming Saturday!

...I've been informed of some more info regarding that touchy Phoenix Rawhide show. (my post on 5/11). I had tried to sort out what happened based on numerous sources, but apparently I mixed up some facts in the process. I'd like to apologize to anyone at Geffen or KEDJ who may have been "slandered" by what I wrote. I was just reporting the facts as I knew them, but admittedly, I wasn't there. So here are some clarifications:

1. the size of the show. The special in-store and promo show events on this "Hooptie Tour" do not have a set size limit of atendees. (I had written that the audience size was intended to be approx 500)

2. While this flies in the face of what dozens of fans have emailed and told me they had heard, neither the San Diego nor Phoenix radio stations actually specified the amount of time band would play. (I reported that fans had heard the shows (particularly the Phoenix one) being hyped as full hour+ sets.)

3.While this also contradicts what some fans told me, the radio stations only gave away the amount of tickets that the record label, radio station and band agreed to. There were no extras given away. (I had basically paraphrased what several fans had written in about seemingly overcrowded venues and what apparently seemed like an unusually high amount of contests to win tickets)

4. As the facts were reviewed, it is now understood that 400 extra tickets, not 1000, were sold at the Rawhide show, bringing total attendance in the neighbrohood of 1500(?). The big thing I had mixed up was that Rawhide owes the STATION money, not the other way around. The station insists that Rawhide sold tickets without anyone's knowledge and/or permission. The station is calling Rawhide to find out why they sold tickets. I do apologize for this blunder in fact-gathering.

....More to come later tonight! I am in LA with the band at last! Pics from the AOL chat thing! Camp Outs are settiling in!