Today's autograph signing thing was outdoors at the Mars Cheese Castle in suburban Milwaukee somewhere, and almost everyone reported that it went well, in spite of very cold temperatures, and a general lack of anything else to do besides wait in line and be cold.

I wasn't there today, however. Today, I accompanied our tour manager Gus on an very important mission, mainly a mission to save tomorrows secret show! It seems that due to the very secretive nature of this special show, not everyone involved at the administrative level was on the same page, and this morning Gus got the sudden word that the show was "off" unless emergency measures were taken! Now, Gus is truly one of the very best tour managers in Rock today, and if he can't get a problem solved, then no one can. The band sent him out to try and make things right, and sent me to take notes and back him up if need be. We started the day by hooking up with our ally and a freind, the show's promoter. Then we travelled way the hell out to the town where this thing is happening tomorrow (sorry if "way the hell out" counts as a clue or something, all i know is it was a long car ride!) Then a long, often heated meeting took place, between Gus, the promoter, the venue's owner, the village's attourney, the Village Manager (technically Mayor), and the Village's Cheif of Police! There were definately some misunderstandings that needed to be worked out here, and Gus was his usual calm self and skillfully defended and defined the band's position and plans. In the end, the show was back on, albeit with increased amounts of security and police presence planned. (As if weezer fans are such troublemakers, but at least everyone is satisfied and the show is happening after all...) A pat on the back for our man Gus! 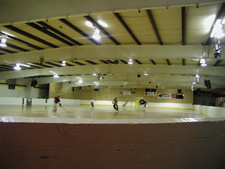 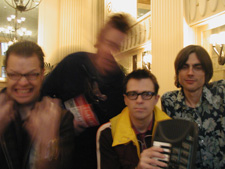 is this a clue? I hope not....yet another perfect publicity photo!