...now this is one hell of a tour! Put Jimmy Eat World, Tenacious D, and Weezer in one little rock arena, and we are in business! There were a lot of smiles tonight, needless to say, amongst them just about everybody in all 3 bands, and everyone I saw in the audience. Back in '95 Jimmy Eat World were early fave's of Mykel and Carli, and its awesome to see them rising on up at last. And what can you say about Tenacious D? Just put your rock fingers in the air.... One cool thing amongst many was that we had a happy little reunion with Rachel Haden (ex That Dog, currently touring with J.E.W.) Now, I'm hoping and planning for some backstage craziness on this tour, to document and put up in videoclip format for ya... 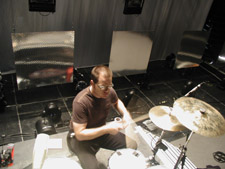 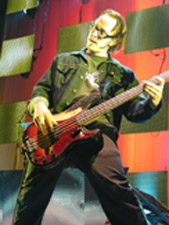 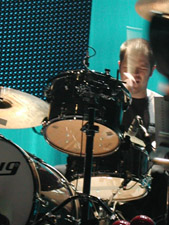 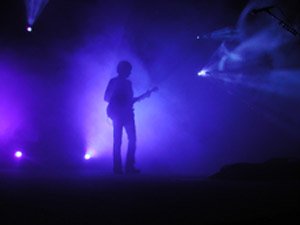 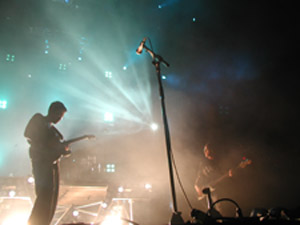 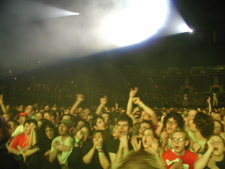 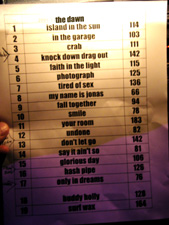 "I went to the show in Portland last night and was exteremely pleased, as usual. The D was highly entertaining and amusing, excellent choice I must say. This was the 5th weezer show I've attended, and I liked the lights and stage set up. It was different seeing Weezer play in a hugevenue as oppososed to the more intimate, smaller shows I've been to.However, I'm glad that everyone that wanted tickets were able to get them. The new songs were a treatand sounded great! Again, it sucks to be short and have to struggle to see around taller people, but what can you do? I do know where all the people who like to make out at concerts like to stand though." --Michelle

"I was in attendance at the Portland show (waiting in line for hours in the soaking rain) and I must say it was an awesome show. I was in the front row center (I am in the crowd picture you took, to the far left with an orange
sweater on) and I just cannot express in words how absolutely fabulous the show was. The new songs rocked, the band looked and sounded great (as did both opening bands, during the Tenacious D set, Jack Black complemented me on
my orange and blue sweatshirt from the stage, telling me it made him think of "f---g") and I left with a concert buzz unparalleled by any concert I have ever attended before. It hasn't worn off, I still feel as if I'm floating in
a cloud of joy. Ha! Thanks so much for coming to Portland!! You guys rock, Scott is a great addition to the band." --Caroline

"Saw Weezer in Portland last night, they rocked the house! As did Jimmy and 'The D'! Overall, an EXCELLENT concert! Watching the guys perform 'Only In Dreams' under the blue fog was incredible. I also really liked Scott, he seemed like a cool dude....when Scott threw his pick into the crowd I ALMOST caught it! It hit my hand and then bounced off into the crowd! I was so irritated!" --Zen

"I went to the Portland, OR show last night and must say that I left totally fulfilled. I need to say is that "Only in Dreams" has been my favorite song since I was in 7th grade, so that makes it my all-time favorite song for the
past.......6 YEARS!! Anyway, you can only imagine how I felt when they played it last night. It was like I was the only person in the entire arena, like they were playing that song just for me. That song brings back memories
that span my entire teenage life. It was a feeling I will remember forever. I just needed to share that with someone who could appreciate it, thanks! ---Kristin Beck

"i just got back from the portland concert about ten minutes ago, and all i can say in reaction to that experience (my first rock concert, let alone weezer concert) is wow. me and my friends waited in line for two hours in the blistering cold wind and rain while taking turns hanging out in the cafe where some djs that we met the other day were hanging out too. when we finally got in the building we seemed like three out of maybe 40 people in the arena (later to be maybe 4000...). The whole row in front of us had papers with the name "Rachel" on it. Well, the first thing I thought was that they were the people that petitioned for Rachel Haden to be there (which happened, a very surreal experience since i so admire her voice from "i just threw out the love of my dreams"). Anyway, Jimmy Eat World: excellent, EXCELLENT performances. very rocking. of course me and my friends got knocked around quite a bit. Even more during the Tenacious D performance (which was quite funny despite the moshing), when my friend got totally knocked over by the stuff and eventually her and i felt so bad we had to surf our way out of there (which was so much fun). when we got back to the concert, weezer was JUST about to perform, and they were awesome. no, beyond awesome; spectacular. scott for one, was amazing. a lot better than i gave him credit for. and of course, pat (my favorite) was kick ass on the drums, which me and my friend let be known ("Pat, you rule!", "Go Pat!" "Pat rocks the house!"). We kinda got freaked out when my friend who got knocked over saw a girl that was next to her in the moshpit earlier getting oxygen through a mask and had to be on a c-spine board...but on a happier note, we heard Tired of Sex, always a classic. And after that "Undone", my third favorite performance, next to "Say It Ain't So" and my favorite "Only In Dreams". Wow, that was so cool with all the confetti falling down and the smoke everywhere. I was glad my friend had the chance to take a picture of that because I'll have to get doubles on that scene."--nemo