...San Jose, the first of 2 make up dates from shows cancelled after the 9/11 attacks. These people had to wait extra long for their dose of the rock, but i think the 3 band rock assault was sufficient to slake their thirst for the roaring highs and deafening lows. Good 'mush pit' action again tonight, to borrow a phrase from Jack Black, who along with KG put on a particularly rib-splitting show, reminding all of the power of, uh, electronic saxophones. And i thought the J.E.W. and weez blew another set of doors off in style... 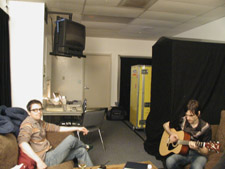 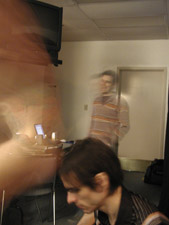 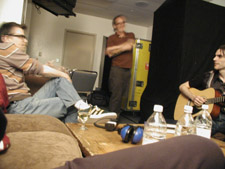 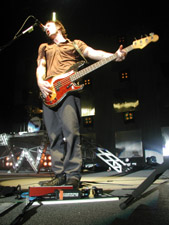 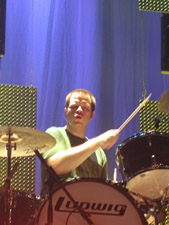 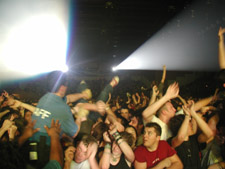 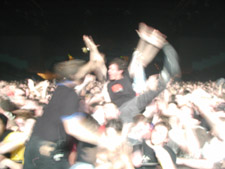 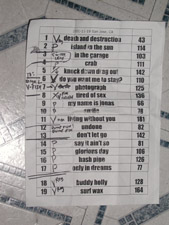 "I have to admit, I was losing a lot of faith in
Weezer, in Rivers. But you guys are proving me and
many others wrong. You guys are really brave for
sticking to your guns no matter how much fans wanted
certain songs played. Now i'm getting a feel for what
you guys are doing musically. If you guys keep this up
you might change the landscape of American music the
way kurt did. Im really proud of Weezer. You guys
ROCK!! Oh and good f---n call bringin the D on tour.
Theyre showin people that you dont need loud guitars
adn screaming to rock the house (ahem* COLD)." --DAVIN

"I just got back from the Weezer concert in San Jose, and I just have to say that it was absolutely mind-blowing!! They played a perfect mix of old and new stuff, and even threw in a few never-before-heard tracks. The high-point for me was when they played "Only in Dreams" and the whole stage filled with smoke and blue light, and all you could see was Rivers' shilouette in the background. Still brings me chills! I hope you decide to come back to the Bay Area very soon!! Thank you so much for an amazing show!" --Helen

"I was at the Weezer/ Jimmy/ Tenecious D show last night in San
Jose. Oh my frickin' gosh! It was the best show I've ever seen!
Okay, okay. I haven't seen a lot of shows, but it was. I saw
Weezer, the Start, and Cold on Sept. 12 in Oakland, and this show
was WWWAAAYYY better! There were a few reasons for that:
1: Cold wasn't there.
2: Jimmy Eat World was.
3: Weezer played "Only In Dreams" (easily the best song of the
evening)
4: I had purchased Pinkerton between the two concerts and it was
really nice hearing "Tired of Sex", now that I know the song.
5: Rivers said: "Thanks Be-oches", to one of the Techies.
6: Some of the production glitches were worked out (Oakland was the
first night of the Midget Tour)
7: I've taken in a lot of Weezer over the last two months:
Purchasing Pinkerton, Watching re-runs of Saturday Night Live, On
the Web Site twice a day, Watching Reverb twice. I had about as
much Weezer as I could handle. I wasn't expecting any surprises.
Weezer was better than I'd ever heard them before. Totally
refreshing! Thanks for Rockin' hard! One more thing: Two more songs of Jimmy
couldn't hurt anyone. One less song of the "D" also couldn't hurt
anyone. The "D" was really funny, but I kinda got uncomfortable
when JB was singin' all those swear words, and all that stuff about
Sex. Anyway, overall, an extremely enjoyable experience!" --Fuz

"This show was pretty great. J.E.W f***ing rocked and
Tenacious D put on a great show too. Weezer was
awsome, but they didn't look like they were having a
lot of fun. They weren't rocking out on stage and he
didn't really talk to the crowd, it seemed too much
like a routine (which I'm sure it was). But I guess if
I'd been on the road a while and the fans got pissed
everytime I played something off of my new album, I'd
probably react the same way. The fans were seriously
dead for anything that wasn't made prior to the Green
Album (with the exception of Hashpipe), and everytime
there was a song break they yelled "El Scorcho" and
"Pink Triangle". I hope the next time they come around
they act a little more lively and play El Scorcho,
just hearing that song would have made up for all the
lack of expression. But anyway... thanks guys for
putting on a good show." --Nick

"Upon arriving at the Event Center, I noticed a lot of cars had Weezer
stickers and decorations, and they looked great. Tenacious D was really
enjoyable live; they were funny and energetic and the crowd seemed to enjoy
them a lot. Weezer played a nice set of songs and a new one that Rivers
said had never been played in an arena before. The new song had a sweet
electric guitar riff. There is only one thing I can say about "Only In
Dreams": beautiful. The confetti, the smoke, the blue light...it did in
fact feel like a beautiful dream. On a personal note, I want to thank the
band and their crew for coming back to San Jose to play the postponed Sept.
11 show. For a brief moment, I forgot about the troubles of the world.
Music lives on!" --Amy