...be sure to keep an eye on the Audio-Video section, the treats are coming in regularly these days...

...Seattle: Extended Midget #2. A few different new song choices, an inexplicable pause and restart on "Only In Dreams", and more crowdsurfers than the security guys could shake a stick at! Solid big rock. Also, J.E.W. sounded great, and with Rachel H. on board for some songs it was icing on the rock cake. And the D turned in another hysterical set of their stonehenge laden gusto. Those dudes can shred! I feel very fortunate to be witnessing this tour, it feels somehow historical already. 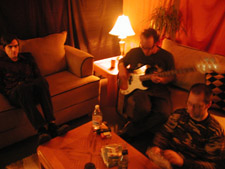 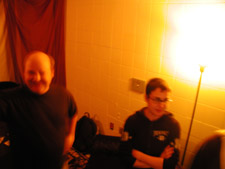 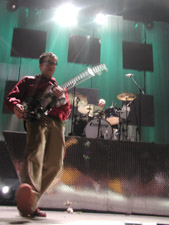 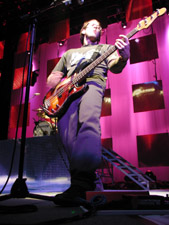 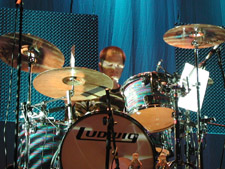 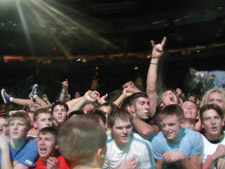 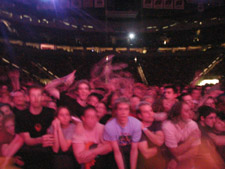 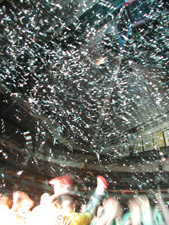 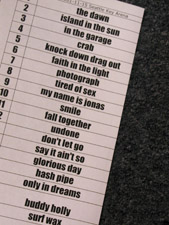 "Dude - that was the best concert I have ever been to. Weezer puts on such an awesome show live...listening to the cd afterwards makes me want to go back and hear it again. Things were *really* packed in the Key Arena though...being 5'1" didn't make it any easier to breathe, especially when you're right behind the person next to the rail, in front of Brian. Being in the crowd was awesome; everyone was jumping around and being cool with each other, twas great. (I heard that from the seats it looked like a ripple effect when everyone was moving back and forth and side to side. I felt it too :) It was definately was the coolest experience ever (especially with the second-hand *** effect - whew! heh.) Weezer kicks major ass!" --Kelly

"the whole experience is like a dream to me......from the very beginning when jimmy eat world started playing bleed american, I was in a trance. i seriously have never seen anything so great before in my life. so i just sat there and stared at them the whole time. J.E.W. was so wrawking it was like indescribable and rachel haden sounded just like an angel.
then WEEZER came out and it was just madness in there. rivers' voice sounded amazing and he frequently threw in new little vocal twists on the songs.
i thought it was funny that funny was after one of the songs, rivers goes... "um, i need to tie my shoe". so he ties his shoe and goes back up to the mic and says "heh.. sweet." and goes right into the next song! hehe the only in dreams beginning was a bit messed up but the song went great from there after.
scott sounded awesome up there and pat & brian were just rockin' out. everything was unbelieveable... i'd give anything to experience that concert again. as other fans have put it, i truly feel like i'm floating in air and
all i can think about is how great the concert was. it was so much more than i ever expected, thanks so much!!" --Cynthia

"24 hrs after the show the high of an awesome show, and squishy "mush pit" (Jack Black's interpretation of the scene) is still very real (and physically visible). What can I say?? Me and a buddy skipped school to come
from Vancouver Canada for the show, waited in the coldfor 5 hours while playing Weezer covers with our acoustic guitars and we were not disappointed in the least! Jimmy Ate the whole World with an awesome set and the D were as expected with their silly songs, a very good couple openers!! Then on comes Rivers and the crew to a packed arena of screaming fans. A totally awesome set that left everyone wishing the music would ring in their ears forever. If anyone has the chance i beg you to check out the extended Midget Tour, you will be left in aww. Only in Dreams was a moment I'll never forget. I begged a security guard for a set list (something i've longed for for years) but it was to no avail. This means one thing...another road trip!!! GO SEE WEEZER!!!!" - BK

"The day started when our teachers let us out to go to the show.. I told em an unexcused absence is an unexcused absence so im going to the weezer show. We got to the key arena at 1130 and to our suprise we werent the first
there. We got told to leave because a line could not be formed untill 330. so we grouped in a covered area untill then. Sorry to the sing along guys...not to many people were singing. At 330 we lined up and hung out on the tarp. We tried to deliver the coookies my mom made for rivers, i hope he got them. We got inside at 600 and Jimmy was great and so was D. I managed to stay up on the baracade ubtill weezer came on. It just got to
tight and the crowd surfers were too much. we moved to the back and the show was great. It made the whole day worh it when rivers said "im feelin the old school" it was great. surf wax was the best way to end the evening and everybody went home happy . All in all it was a great show. People from the tarp you rule! and heather if you read this thanks for keeping the line cool!" --blake

"I just have to say, I was sadly dissapointed by the show last night. I was pretty psyched to see Weezer and Tenacious D, but both failed to live up to expectations. Tenacious D's schtick is funny the first time I heard it,
when I made songs like that up in 8th grade (I'm 19, a college sophmore). I'm not that big of a fan of "The Green Album," but I enjoy it every now and then. The songs are just plain boring in a live setting. That the band
just plain teases people by only playing "Tired of Sex" off of "Pinkerton" is kind of annoying. They know the fans love that album, I know Rivers and the crew feel it's a dissapointment, but it's now a classic in many circles.
The crowd was way more TRL than I would have expected. It was either 14 year old girls screaming for "Hash Pipe" or frat a******s pushing people out of their way. I know for a fact I'm not the only one who felt this way. All of my friends were just as dissapointed as myself, and I met some other people at the show who just reacted with casual indifference to "The Green Album" songs and the new stuff." --Tall Chris

(note: these and all the many other stories i recieve, will, as always, be added to the 'fans stories' area in the "Weezer Fans" section. it is admittedly several months behind right now, but it will get caught up a.s.a.p.!)