...today's show was in what they call an "architectural treasure" in books, the mammoth 1930's Art Deco styled Municipal Auditorium. The show was totally sold out, with people sitting in the very highest rows all the way up to the top. This crowd was wild and crazy, and just went bananas at any opportunity. A ton of people were singing along with Tenacious D even, which can only be interpreted as a good sign.

Now, the secret benefit of this building can be told- it has more and bigger backstage ramps than even the Cobo Arena in Detroit! So Pat and I took the opportunity to film some downhill runs, this time with Pat seated on an electric powered scooter (that youre not supposed to sit on!). Equipped with a hand brake, Pat was doing some serious skidding. This footage (the "Muni Challenge"?) will be coming your way asap. I do apologize for the slow production rate of new home video clips. Im simultaneously working on a bigger video project while on the road (which you will soon be able to view on the website as well, never fear), which has been squeezing my available video editing time down a lot. But it's coming, it's coming!

Rivers rocked out a new Gibson Explorer guitar tonight, which has joined his recent addition of the Flying V. Whats the plan? It looks like he's still experimenting. Could this be it for the Stratocasters? Meanwhile, a Rickenbacker has been spotted on Scott for certain songs. Equipment chaos!

Tonights special backstage guests were The Get Up Kids, who weezer shared the bill with back in February. It was great to see them. 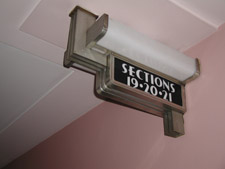 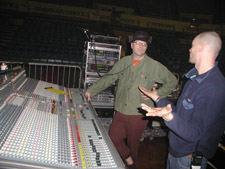 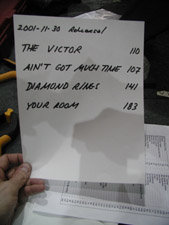 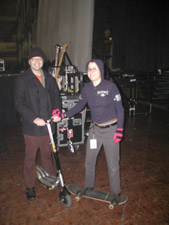 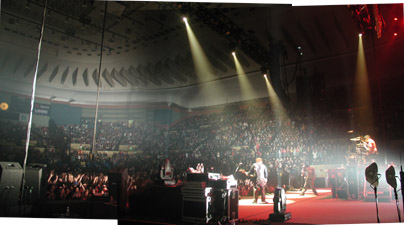 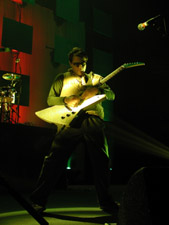 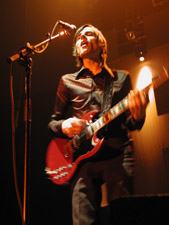 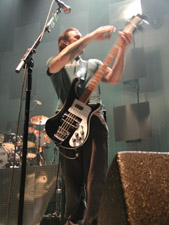 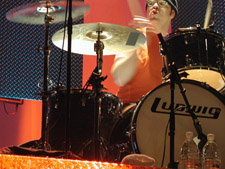 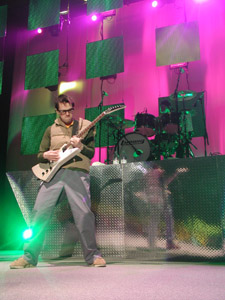 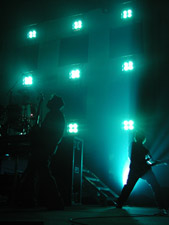 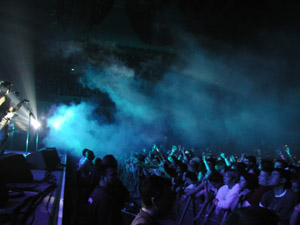 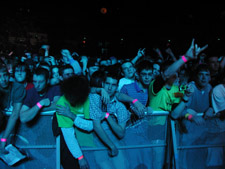 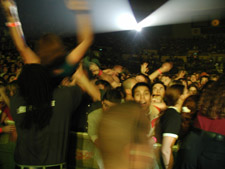 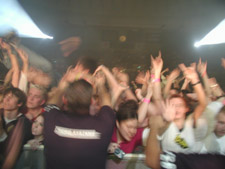 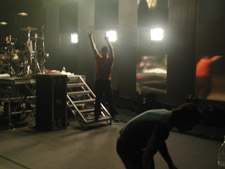 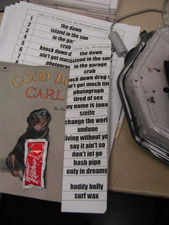 "we talked to several people before and after the show who had come from many many different places- kansas, iowa, st. louis, colorodo... several people arrived early that morning. lots of cool people to talk to, all very excited about the forthcoming rock. when we entered after a bitter fight to get through the doors (crowd control sucked, they opened the first set of doors, everyone rushed in, and then only one door and a lot of people got smushed. anyway, we had balcony seats with a nice view of the stage.

the floor looked vicious, lots of crowd surfers who were being heaved all over the place. several mosh pits popped up during surprising songs; like say it ain't so and don't let go. there also seemed to be a fair bit of pushing from our perspective on the balcony, which seemed to be the safest place. between the d and the weez, we snuck down to the lowest seats behind the stage sort of. we saw pat and the motorized scooter several times. we caught his attention, he squinted and proceeded to raise his hands and wiggle all of his fingers at us- we are convinced it was a voodoo death curse. then we got kicked out of that section.

as for the music, rivers' new guitar arsenal sounded rocktastic, very befitting for the sound of some of the new songs that were being played. the overall band sound was superb, although there seemed to be a bit of a tangle in surf wax. we were quite impressed with all of the lighting effects, especially the reflective panels and the =w= under pat's drum set. the smoke is also a very nice touch, especially during only in dreams, which was the highlight of the show. it seems almost like a battlefield at times, and from our position, the light caught pat in such a way that he made a giant shadow in the purple smoke, which got larger as the smoke spread. afterwards, we waited outside for some time and met some really nice people. scott and brian came out, as well as pat and kyle from the d. all and all, it was a rocking good time.

oh yeah, there was a huge banner that read "home of the kangaroos" by the main entrance, which is the university of missouri kansas city mascot- a strange one at that. we were stunned that you didn't have a picture of it (such a thing is expected for the photo album!). we also ran down the ramps at the end of the show and talked about how cool it would be to see pat cobo-ing it down those badboys." --david and car-o-line

"This was the first time I have attended a Weezer concert, though I'm a long time fan and I was blown away. Thank you for the greatest night of this pathetic white guy from Iowa's life." --Jared

"ok, first i have to admit something that has been bothering me. this was the first real concert ive been to since Garth Brooks back when i was 11. yes i know, shame on me. anyway the show rocked! after having to settle for balcony seats, i ran into some floor seats and obviously took advantage of them. JEW began the night with an incredible set. they had plenty of followers, all wearing street team shirts. next, the D came out in thier own, one of a kind style, playing many of thier hits of their debut album (which according to them, wasnt being bought by enough kansas citizens). during the intermission i pushed and shoved my way up as close to the stage as possible, and waited in anticipation for my first weezer experience. the auditorium was packed, after being only partially filled for the opening sets. it was incredible, i must say. the crowed was psyched as the guys played all of our Blue and Pinkerton fav's, along with some new tunes, all of which rocked. the night came to a perfect end when they played Surf Wax America. all in all, i couldnt of asked for more. i sit wondering what can top this." -chris.

"the show last night was amazing. my socks were blown off. body surfers surfing every which way. up front my ribs wre cracking, no matter though it was a killer show. i loved how they bring out the weezer sign for the encore. sorry about that whole sweater hitting rivers thing, it was supposed to hit the floor, but i opted to have some boy throw it and he kinda hit rivers, wasn't supposed to happen, but i hope someone has the sweater. the STA is st teresa's academy, an all girls catholic school here in kansas city, im hoping i'll find a new school sweater for myself in the lost in found there's always a bunch. the show rocked out. j.e.w. played "sweetness" i enjoyed that much. I however did not enjoy the cancelled show at recycled sounds at 3 by tenacious d, apperently it was the label who did it though." ---maura

"Yesterday, me and six friends made the trek from Ames, Iowa (located in central
Iowa) down to Kansas City to see Weezer, Jimmy Eat World, and the D at
Municipal Auditorium. The drive was fairly long, but none of us left the show
disappointed in any way, shape, or form. I was worried about whether or not
one of my friends would really enjoy the show, since rock music generally is
not her thing at all, but when Surfwax America came to a close, she
exclaimed, "THAT SHOW WAS AWESOME!" (She could not have been more right.)
Knowing that she loved the show, and the rest of my friends loved the show,
made me extremely happy. We all thought Jimmy Eat World were spectacular, and
we each liked Tenacious D in our own way it seems. The acoustics of the big
ol' auditorium weren't the greatest, as there was a lot of echo-action going on
up high in the balcony, but the show was a blast nonetheless. As a friend of
mine put it today, "THAT WAS THE BEST SHOW I'VE EVER BEEN TO!" All the songs
were great, in particular Only in Dreams and Surfwax. The lighting effects
were spectacular, and it was great seeing the flying W. Thanks, Weezer, thanks
for the happiness and jubilation you brought myself and the six friends I was
with." --Mike Huston

"I saw the boys in Kansas City on Friday. It was a very good show. I live
in Tulsa Oklahoma, and was a little disappointed that =w= was not coming to
play here, so I had to go to the nearest place I could to see them. Five of
my best friends and I drove up to there to see Weezer, Tenacious D, and
J.E.W. We were a little angry because our drive was a little delayed so we
missed 99% of J.E.W.'s set. I was still happy though because Tenacious D
rocked the house. They were even funnier than I thought they would be. I
was very surprised and happy that Jesus Ranch was included in their set.
After the D got off stage the crowd was ready to hear weezer. I thought it
was cool hearing them open with a brand new song. I am not a huge fan of
the green album, but I enjoy their new material very much. The Dawn is a
very groovy tune. I was very surprised to see Rivers playing an explorer.
What happened to the strats. I guess Rivers is becoming a big fan of the
Gibson guitars. Anyway tell the guys thanks a lot for the great show." --Trent