...today was marked with some very interesting pre-show interviews. MTV2 was on hand, and filmed Weezer interviewing Jimmy Eat World, Tenacious D interviewing weezer, and Jimmy eat world interviewing Tenacious D. In all 3 cases it ended up being sort of a mutual back and forth interview that went both ways, as the bands just started conversing. All of them were funny, but of course the ones with Tenacious D were pretty hysterical. Then MTV2 videotaped the entire show, all 3 bands. I think their plan is to show several live performances and the interviews as a sort of Extended Midget Tour news report special. No word yet on when this will air. 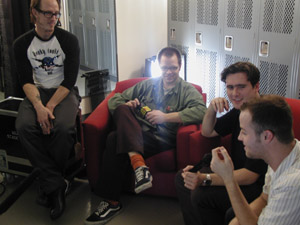 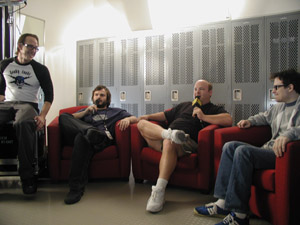 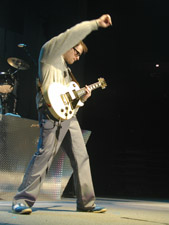 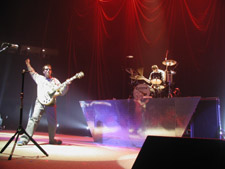 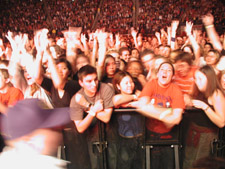 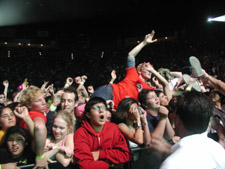 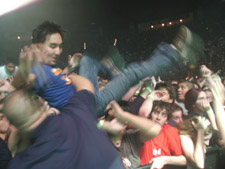 "I know that today is the day after the San Jose show, but it just hit me: Weezer is real. I was waiting a while for the rescheduled show and when it was finally announced, the count down began. Ever moment leading up to seeing the show; TV apperances, driving down 680, finding the line, getting busted with the digital camera (crappy), going on the floor in the mush pit, especially with JEW and the D, was so exciting (cept for geting busted). But when the guys took the stage, it was some what surreal, like I was watching a movie, or even dreaming?. I was far away and I had to get closer to prove to myself that they were really there. And closer I got, pushed through the jelly fish like crowd all the way to front. I was like dude, those are the guys on the videos I watch, the guys I see on TV, the guys I have listened ever since I heard Undone. I just figured it out two minutes ago that I was so close, and dude, Weezer is real. The awesomeness overwhelms." --Helena

"I really think it just needs to be said that Weezer kicked our trash tonight in San Diego. I have never been to a better show in my life. The SD weezer fans had to wait extra long for the show due to the september 11th thing, but it was well worth it. The set was so incredible. Biggest shocks were ( I think ) Tired of Sex and Only in Dreams. In the Garage was an awesome surprise so early in the show, especially since Rivers called it Old School before playing it. I almost died when they started playing Say it Ain't So and I think I might have fainted during Only in Dreams. Their new stuff was very tight also. Overall, if I never see another show in my life, I wouldn't mind leaving on this one. Thank You Weezer for the best night of my life." --Daniel

"just wanted to tell the guys, "THANK YOU for the music!" we just got back to los angeles from the san diego show, and it was amazing!!! it was so much fun to see rivers playing the "rock star" & having a good time, talking to the crowd & everything (although i can't believe the random projectiles that seemed to always be aimed at rivers's head)! i was lucky enough to catch them when they played the intimate shows at tower records last spring and then in the viper room the other week -- i thought for sure that there was NO WAY weezer could top those incredible experiences, but the energy at this arena concert completely blew my mind!!! thanks, again & rock on!" --Vy

"I just got back from the San Diego show. My 2 friends and myself both agreed that the 2 month delay was worth it in the end. I was looking forward to seeing Jimmy Eat World. I was not disappointed. They were awesome! I have nothing but praise for their show. Tenacious D was another story. They were boring and stupid. Saying the F-word in different ways to attract laughs is a sign of having very minimal talent. Weezer kicked butt! The three of us figured that the crowd would be 70%/30%. 70% would be the people there because it's a concert and/or there because they liked Hash Pipe. The other 30 were the hardcore fans. Boy were we wrong. There is nothing like hearing the crowd sing along to the classics from the blue album. I absolutely love Pinkerton. When Tired of Sex was played i was ecstatic. The show was awesome. Weezer were superb, Jimmy Eat World kicked ass and Tenacious D sucked! I look forward to seeing them again in Long Beach." --?

"I just got back from the Weezer concert here in San Diego and I have to say, It kicked Ass!!! I've been waiting for this concert for like 6 months now because it was originally postponed. The whole line-up was great. Jimmy Eat World came out and just rocked the house. They put so much energy into thier music and Jim Adkins just goes friggen crazy with his guitar, it brought a tear to my eye. Opening up with Bleed American just pumped up the whole place. Their set was kind of short. I was hoping to see more of them, they are one of my favorites. After they played, out came "The D". Tenacious D is just awesome. They put on the funniest performance. Jack is a great performer and I was just laughing my ass off throughout their whole set. Finally, after two great bands out came Weezer. They started off with Death and Destruction and then went into Island in the Sun. It was beautiful, the whole crowd sang along to every song, with the exceptions of the few new ones. They had crazy lighting effects and smoke and sparkles, it was just a crazy and fun atmoshpere. This was definantly the funnest concert I have been to in a long time. The lighting effects during only in dreams was awesome. They had a blue light right behind Brian and all we could se was the siloutte, it was a beautiful thing. My voice is shot from singing along to all the songs. No regrets though, I would've continued to sing along if their show had lasted another 3 hours. It was great and now I just can't wait till Weezer comes around again." --Matt