... todays show was going fine until weezer was returning to the stage for the encore. Somehow in the backstage darkness, Brian took a bad step and tumbled clear off the ramp! After an extra long wait for the encore, the guys got back in the groove. Brian reports a bruised hip and a sore wrist, but was able to finish the set without too much difficulty. After the show he iced up his hand to prevent any swelling. It just goes to prove that 'the road don't take no guff', as Tenacious D say. Well, actually tonight The D skipped their "The Road" song for some reason, but their set was hilarious as usual, and was capped off with a fairly faithful cover of some of the Beatles "Abby Road" album, which was nice considering the sad news about George Harrison...Meanwhile it sounded to me like the weez men were making some subtle changes to "Dont Let Go". I cant really describe what was different, but it sounded pretty cool... 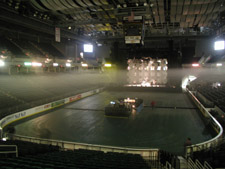 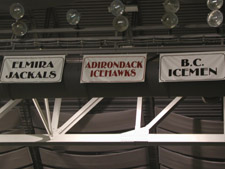 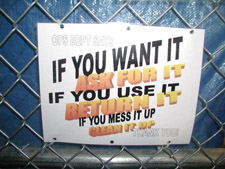 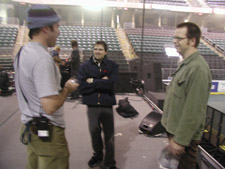 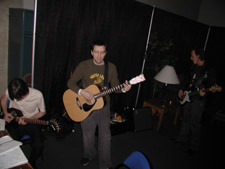 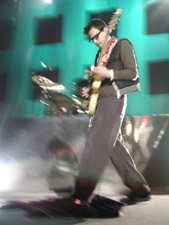 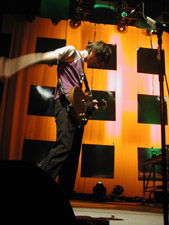 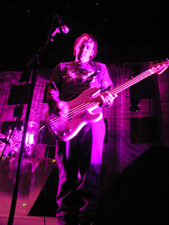 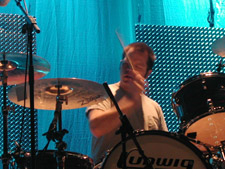 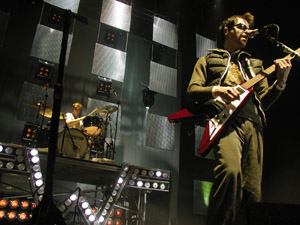 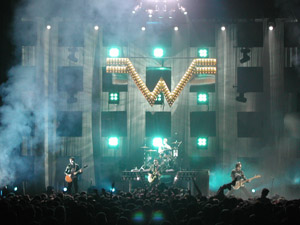 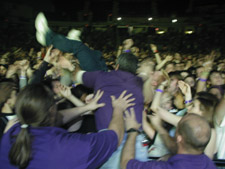 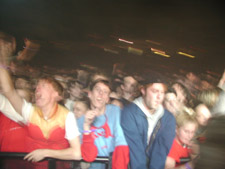 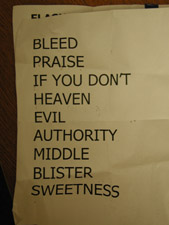 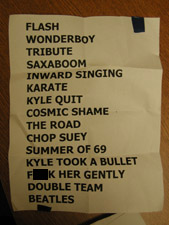 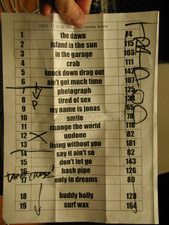 "Weezer literally rocked my
face off tonight. I wouldn't be staying up as late as
I am (considering how early I have to get up) writing
to you if I felt otherwise. This was my second show,
the first being the one at Mizzou in March, and
naturally I thought that one couldn't be topped, but
this one was insane. My friend Kate-Marie moved to
Holland in the summer and before she left we
immortalized our admiration of Brian Bell on t-shirts
which amazingly enough read "I love Brian Bell".
Naturally I wore it tonight with the greatest pride.
J.E.W. and the D were awesome but Weezer was by far
the best. Towards the end I moved from my seat down
to the barriers which separate you from the floor.
Yeah, just to let you know, my friends and I were the
ones screaming "We love Brian Bell" the whole night.
Actually, I'm the only one that does, but it was a
group effort. Anyway. I was dancing like a maniac to
Surfwax when Brian looked straight at me and smiled.
Of course I thought I was being dillusional, but at
the end of the song he pointed right at me and said
"Nice shirt!" into his mic, for all the world to hear!
Ahhhh, it was one of the raddest moments ever; Brian
Bell is my hero. But really, the whole THING was
great and I hope you guys come back soon." --Eliza

"Despite the hour long grid lock and unpleasant
security, the St. Louis show was an outstanding.
We got to the floor literally five minutes before
Jimmy Eat World started their set. Which just as
powerful as the cd. Jim Atkins went crazy from the
first note of "Bleed American" to the last note of
"Sweetness." Could have asked the same from the
audience, who seemed a little dead during the entire
set. Then the "D" rocked the house with, what I am
told by my friend who saw the Phoenix show, a totally
different act. We got to see Jack Black play a
"special" instrument, hit on a girl in the front row,
and make fun of some guy flipping him off. As for
Weezer, We got to hear some new songs that had a much
darker feeling to them, a new side to =w= that is
surprising. We even got to hear "Don't Let Go" in the
key of E. Unfortunately, I had to inform some
outspoken audience members, who insisted on screaming
"EL SCORCHO," that the weez won't play it, they never
play it. Better luck next time. A wonderful addition,
since the last time I saw them in Chicago, was "Only
in Dreams." Complete with heavy fog, and confetti at
the end. All and All the show brought a smile to my
face and helped me get my brains out of my way.
Great Show Guys," ---Mark

"I arrived at the family arena filled with anticipation and excitment. I
showed up a little late and missed jimmy eat world....but i was right on
time for the "D" It was the second time I had seen them live and they are
yet to fail me. The saxamaboom was absoltely fantastic...iwas in stiches
dude! The crowd recieved them well and when they left the stage the crows
energy could really be felt...a few thousand thick black buddy holly were
fixed on the stage in waiting for their heros....there were a few annyoing
sparkly shirt teenyboppers and idiotic posers but the crowd was overall
pretty much real fans.
As weezer finally took the stage a wide range of emotions came over me....it
was finally hiting me that....rivers, pat, brian, and scott would be no more
than 100 ft from me..my heros. Everyone wa ont there feet....they opened
with the dawn which im looking forward to being on the album next year. My
=w= was held high through the whole set...except when i was rockin out on my
air guitar or dancing. The crowds energy was amazing...it was sooo rad
dude. We all sang along to the classic's and and green.....and rocked out
to the new jams. I cant wait for the new album. When the played tired of
sex i went in to a state of ecstacy! It was niffty!!! The highlight of the
night came during Only in Dreams...when the confetti dropped...i turned to
my gf and in that magic moment we shared our first kiss!!!!wowza!!!i love
her dude! The encore was awesome too....buddy holly...a sure classic...ahd
the chords running up and down my spine...i was rockin pretty hard man!!
I wanna thank Rivers and the boys for making last night the best of my life.
Scott was awesome on bass too...he was no mikey or matt but he
rocked!!!Pat was rockin too man!!!Rivers and Brian shared
guitars...lol...and Rivers was very funny!!!"how bout some U2 guys?"and"last
song beotchs!"haha...and he had the goofiest grin sometimes...it was
great!!!! Rock On Guys!!!!!" =adam=

"last night was awesome. it was cool to see you again... well after waiting
in the cold rain, i got to the front of the stage. as i was waiting for
jimmy eat world, i noticed someone waving to get my attention. it was tom
linton from jimmy eat world! i've seen jimmy everytime here in st. louis,
and i've talked to tom after every show. i've actually given him weezer
b-sides and special goodness cd's. so it was awesome that he found me. and
needless to say jimmy eat world rocked the house. 'for me this is heaven'
was my fav, but when they played 'get it faster', tom rocked out and took
his guitar into the mic stand and it was loud and it rocked. the audience
love it! so then the D took the stage and they were great. i saw them in
october, rocked me then, and they rocked me now. my special goodness shirt
got KG's attention, that was cool. my favorite D moments were 'saxaboom'
and the 'chop suey' cover.... then weezer took to the stage. and as the
other 2 bands, rocked me senseless! i love the new songs. i had heard all
but one from the a-v section and 'ain't got no time' kicked ass! i hope to
see that on a-v page soon. i thought weezer sounded better than ever.
rivers' new solos on the green albums songs were great. i glad we got to
hear 4 new ones! i think my favorite is 'living without you'. i love the
encore with 'buddy holly', i love intro. i miss 'no one else' when they did
the rad intro with that. i will in normal monday for more rock!!!!" matt =w= 1779

"Well, yesterday's show was pretty good. Yes, I said PRETTY good. I have been a Weezer fan since '98 and finally got to see them this year in March. TGUK came out and Weezer came on and just...played. They seemed like they weren't really into it at all. Well, I was hoping for more this year. I donned my Weezer shirt, struggled through school, and then set off for the concert. We arrived and sat down in our seats. About 30 seconds later, JEW came on. They were really good, I had gotten a copy of thier newest record Bleed American, so i knew most of the songs. It was also nice seeing former that dog member Rachael Haden (She should have been on EVERY song!) in action, I being a fan of the band. The D was excellent, I wasn't expecting too much from them, but they made me laugh. (Saxamaboom...heehee.) No one heckled them. Then Weezer came on. I had seen the setlists from previous shows this tour, so I knew pretty much what to expect. The guys were a little more into this show, and did some things to make to cooler, like playing lots of blue album stuff and having REAL GUITAR SOLOS IN GREEN ALBUM SONGS! I enjoyed the new songs, except "Ain't Got Much Time" was really weak. (Sorry!). Unfortunately, I found myself caught up in the chant for more Pinkerton after "TOS"...(again, sorry!) Oh well. The new "Don't Let Go" was neat (i'm pretty sure i was the ONLY person singing along with the new stuff and that song.) Only In Dreams was excellent, as was the encore. I left feeling that i had just barely gotten my money's worth. One thing I was absolutely disgusted with was the floor crowd...why didn't they just buy seat tickets if they weren't planning to jump around and have lots of fun? Why didn't they trade tix with me??? Grr. I wanted to kick the people leaving in the middle of =W='s set right in thier ear. Oh well. Thanks for a good show, guys. Keep on rocking." --Fitz H.

"Seeing Weezer in St. Louis was my third time seeing them play this year.
I'd have to say that the extended midget's line up is the best I've seen
them with before, watching the D was like being at a broadway show or
something, minus the showtunes... Anyway I was blessed with having 3 VIP
passes just as I had at the show in Chicago. The security at these arenas
never fail to have no idea what those green stickers are, and pretending
they know anything, say "those are just to wear, they're good for nothing."
Good for nothing my ass! I talked to every person of assumed importance in
that horrible choice of venue (the Family Arena has always blown, sorry),
and finally I waltzed passed all those security bi---es into the backstage
area. I immediately ran into Pat and exchanged a few hellos and what not,
then he disappeared on a scooter. Rivers as kicking a little ball around
but I'm a wimp and couldn't talk to him. I wouldn't want to disturb him
anyway, those backstage areas always look like hell to me, with cement and
big gross men rolling around equipment. Ah, well, to put an end to this,
Weezer, the D, and JEW all rocked in StL, and it was beautiful. Viva la
Weez!" --Shannon