...as it turns out, San Antonio's Freeman Coliseum is sort of out in the middle of nowhere, and seems to be part of a county fairgrounds-like area that normally hosts rodeos, ice hockey, and ice rodeos. Our catering area was in the building where they usually brand the cattle. Somehow all this was sucessfully transformed into a rock arena for the night, and the people here in San Antonio do come to rock!

as per some requests, i've included some shots of j.e.w. and the 'D' today. 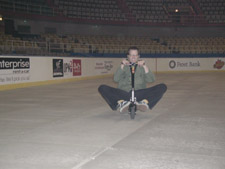 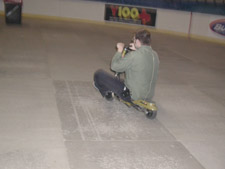 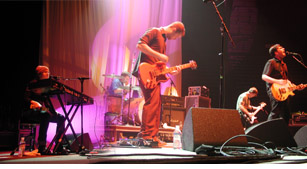 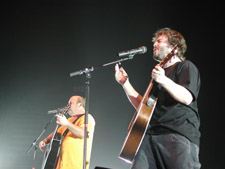 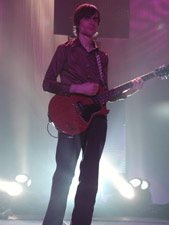 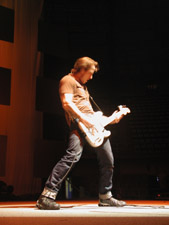 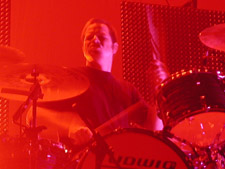 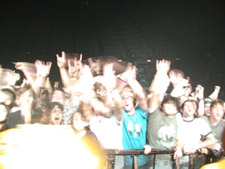 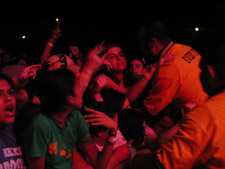 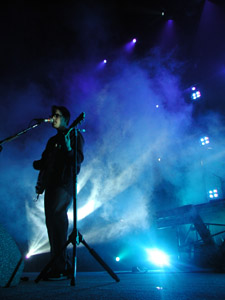 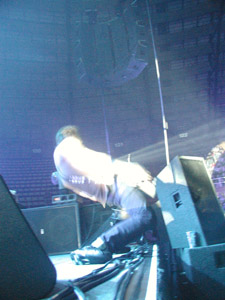 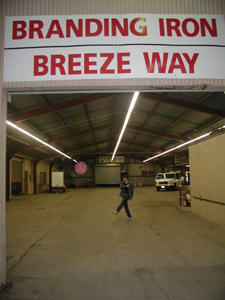 "I just got back from the San Antonio Show, and let me tell you that i feel in love with weezer all over again. Man those guys really know how to put the rock out there for the fans. First of all Jimmy Eat World, blew me away, i mean these guys could headline their own tour with the quality sound they put out there. As for Tenacious D, how bout 2 horny 30 year olds cracking jokes about Creed and covering System of a Down, need i say more.Then came time for the Weez, man they are so awesome, Rivers seemed like he was having so much freakin fun up on stage, and Scott got into the groves hard-core. When Only In Dreams began, i feel in love with weezer for the second time in my life, i cant even begin to explain how magical it all seemed, imagine one of the most beautiful songs ever written, then having the blue haze across the stage and the silhoute of the greatest rock musician ever center stage whailing the tunes out. I dont know which part was better the OID climax or the freak-out at the end of the show, but now that i think about it, the new songs were probably my favorite part, cause they rocked sick like, and gave me hope that the next album is gonna be chock full of some serious power. So basically it was the greatest night of my life, keep on rockin guys." --JBR

"Oh man what a kick ass concert. I was stuck in the nosebleed seats and wanted to be down on the floor so bad. Jimmy Eat World was awesome but I felt bad for them because the crowd wasn't in it too much except for a group of three or four kids right up front on the floor. I just want to say that you kids rock, if you ever go to a punk concert in Las Vegas (where I'm from) you won't be the only ones jumping around for the opening bands. Tenacious D really surprised me, I had never heard them live and they did good mixing up really funny stuff with some good guitar, and the plastic saxophone was awesome, they should expand on that. Weezer just blew my mind away. I saw them in Houston for the second concert of their tour last spring and they were even better this time around, it was nice to be able to sing along to the songs off of the Green album which I wasn't able to do at the concert in Houston. Even though the crowd on the floor sucked they still rocked on. My only complaint would be that Jimmy Eat World should get longer than 30 minutes." --Tait

"So at first I was afraid I couldn't make it because on the sunday before the show, on my way back from home, my car overheated. Crash and burn. Right there on the side of the road, one day before the show...on a sunday! But that can't stop the copper-top rock. I was up at 6 am on sunday having that fixed so I could get back to austin and down to san antonio by 3:30 to witness it all. Being in the front row during the show was fantabulous. Tenacious D can really throw those flows with the best of them, including System of a Down. When weezer came on, all hell broke loose. Pushing ensued, and soon enough everyone was packt like sardines in a crushed tin box. By weezer's third song people were being lifted out and I had little energy to sing along. But whatever energy was immediately used for that. The show was definitely rocking in the free world and the band played a great set. The Freeman Coliseum acoustics are really bad though, and there was nothing that can be done about that. I also got to see Scott Shriner in action for the first time and he can definitely hold his own. At one point in the show, a fan managed to make it on stage and did some sort of vanna white hand motion to brian as he was escorted off, but at least Scott was not taken down this time. The pinnacle of the show was at the end of surf wax. The lights, the band, the improvisations were all tremendous. Worth the entire night of being taunted with death from trampling. But hey, I'm a survivor. I'm not gon' give up." --MK

"Ok, I had fun tonight. I have been to 2 other Weezer shows this year, and
this one was swell as well...Not the best one, because of some things
(mainly my bad seats, but that's a whole other letter), but still really
fun.. I went with my friend Marcel, who has been getting some dosage of
celebrity on the old weezer.com page for his letters to Rivers, but that
didn't help us get backstage, or anywhere near the stage for that
matter..Oh well..Jimmy Eat World sounded really great, I just wish they
played longer...I was supposed to have seen them in Austin, where I live, a
few months ago but they had to cancel. I really hope they come back,
because they rock the hizzy (whatever that means)...I saw Tenacious D a few
weeks ago, but they never cease to amuse me.. System of a down song =
brilliance...Making fun of Creed = brilliance...Saxa-boom =
brilliance...Yes, they are some funny little scoundrels....Weezer sounded
really good..I was far away, and the sound wasn't fantastic, but I still
really enjoyed myself..This was my first time to see Scott on bass, and he
seemed to rock out just fine, even though I suspect that he is the love
child of Mickey Rourke and Dee Snyder..Him and his wifebeater looked odd
for a Weezer show, but whatever gets the job done I guess.....I love it
because I always get natural highs at =w= shows, although this time it
might have been because of lack of oxygen way up in the nosebleeds..Oh
well..Apparently a hockey team was in the audience practicing their body
checks, so I am glad I missed practice"" with those fellows, but I do wish"
I had been closer...To wrap it up, a nice fight outside of the
show....Nothing brings a nice night of rock and roll to a close like a good
dosage of violence...I think that Weezer should stick to Austin though..San
Antonio brings out the bastards..No offence San Antonians" --Unfunny Keith

"This was my third time to see weezer, and I wasn't disapointed, i drove
in from austin just to see the show. I love the new bass player, and I
was very entertained by Jimmy eat world and the "d", however, there were
some bad aspects of the show. First, did JB and KG get weezer to smoke
with them before the show or something? There were a lot of mishaps.
Something was obviously wrong with pat's snare during the first couple
of songs, and "My name is jonas" was really rusty. Second, the small "w"
was broken, tell the light men to just leave it off if it doesn't work
from now on. I was still really impressed with and needing more of the
new stuff. All in all it was a great show, just a surprise to see the
weez a little un-solid." --steven alford

"the san antonio concert last night was UNREAL. we had floor tickets and
were in the second row of people for most of the time. being that close
to the guys was worth being banged up a bit. up there, we finally got a
chance to throw the shirts we made onto the stage. we had made the
lime-green shirts with a sumo wrestler on them to wear to the september
concert in mansfield, mass, but were too far back to reach them. we
really wanted them to get our shirts, so when we found out they'd be
playing in texas near thanksgiving, we decided to extend our thanksgiving
break from college to drive up to san antonio from s. padre island, tx.
we left early monday morning to make sure to get there with plenty of time
(to avoid any 2 1/2 hour traffic jams like the one on the way to mansfield).
the long wait was worth it when we got near enough to reach them with our
shirts. while they were rocking out with In the Garage we decided to
throw the first shirt before the crowd got too out of control. it landed
right near brian's feet and he contemplated it for a few seconds, but we're
not sure if he ever picked it up. the second shirt landed farther back and
after the show we saw some tech guys pick it up. one of them must have
taken it home because he emailed us today saying it was funny. we reeeally
hope weezer ended up with the other shirt. they rocked so hard that we
were pumped all night long. it's a good thing their energy carried over
because between the 3 1/2 hour drive back home, packing, and catching our
5 am flight back to boston for school, there was no time to sleep.
but damn, seeing the guys was worth it allll." --radhika and zina