...a 'clockwork' show, glitch free, and smooth sailing. Except for being cursed with 2 straight days of some pretty lame catering food, everybody in all 3 bands seems pretty happy. No wild stories to report today. The Texans do like their rock music, I'll say that much! 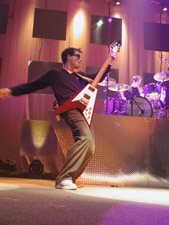 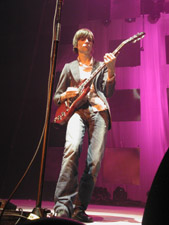 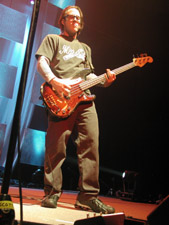 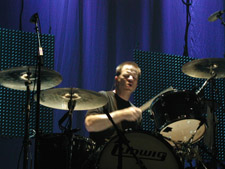 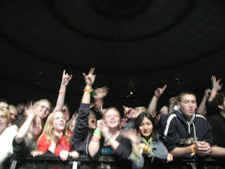 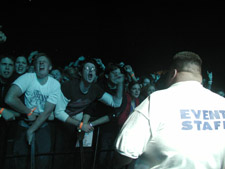 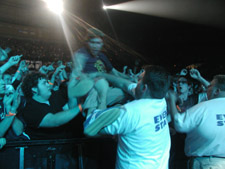 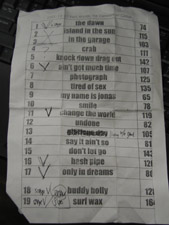 "I went to the concert in Fort Worth last night. My wife, daughter (13) and friend, and I. We paid more than the $27.50 price, but that's okay. I just wanted to see the concert. The last concert I attended was a Beach Boys concert in 1977. I grew up with the San Francisco sound: Jefferson Airplane, Big Brother, Grateful Dead. The first concert I went to was Ray Charles around 1960. Last night was fantastic. Jimmy Eat World and Tenacious D got the crowd warmed up. We were laughing and rocking. The spirits were really high. Nothing prepared me for how much I would enjoy Weezer though. The sound, the lights, the presentation. Un-believable. I've heard Weezer's albums. I love them. But live? They took me in. They took the whole audience for a great ride. I also experienced something that kind of caught me off guard. I couldn't leave without hearing more. The encore gave me the final taste that allowed me to close the concert door. It was fantastic." --Dan

"Hey. There was a lot of great rock and roll in Fort
Worth tonight. It was great to see j.e.w., the d and
weezer tonight, even in such a small venue. During all
of the old school songs like Undone and Say It Ain't
So it seemed like everyone in the place was singing
along. My friends and I waited out in the surprisingly
arctic Texas weather for a couple hours before getting
in, but met some awesome geeks while waiting and even
saw the local band Bye Bye Beijing outside. There was
some fierce crowd surfing and at one point someone
actually got onto the stage right next to Rivers, not
for very long as you can imagine. Maybe it was all the
pot circulating through the air, but Only In Dreams
was a very beautiful moment. There weren't as many of
the brand new songs played tonight but I felt special
knowing the words to them already. Rivers is a genius.
I'm pretty sure at one point I heard him say "You
can't stop the rock." Overall, tonight was a GREAT
night and I can't wait until the =W= comes back to
Fort Worth...." --Andy

"i was at the show in fort worth. i was on the floor at the front near Brian and then later in the middle of the crowd. jimmy eat world was really cool (Rachel hayden was a goddess) but they started right at 730...i didn't like that at all because i missed bleed american and the arena was half full the whole time. i guess im just used to club shows where things always run late. then the d cracked me up. they were so so so tasteless...and, well, i liked it. then weezer came out. it did seem like it took them a few songs to get into it (but this might have been because it took me a few songs to get in a place where i wasnt surrounded by total asswhipes). if there is one thing i can complain about it is that the arena just is too damn big for a concert and that the crowd sucked the hairy banana. weezer's performance as a band was rocking. it just was kinda hard to enjoy the first few songs when there are people bitching at you constantly for getting into it." --RPW

"tonights show rocked out so hard!!! i drove for an hour to get to fort woth from denton to see weezer for the fourth time. When i got there we fooled one of the amazing staff members at fort worth convention center into giving us wristbands that allowed us to freely go on to the floor. It reminded me of that simpsons episode where spinal tap plays on the ice rink, because the floor was just ice covered with a layer of wood, and i thought... wow, weezer has come so far from when i saw them play at deep ellum live in front of just a few fans, now they play for thousands nearly every night! they deserve every bit of it. It was great to see petra haden play with JEW, and Tenacious d rocked out and nearly made me piss myself on several occassions. It was great even before weezer played. But then the boys came on and rocked out with the cock out. (rivers even did the cock-rock guitar pose at the end of the buddy holly solo). It was great to here some good solos on the music from the green album, and the solo on Living without you was kick ass, i really missed all of that on the green album. Well, thanks for rocking my ass again weez!!!!" --Phipps

"Let me just start by saying this: I check the website on a daily basis. I read the stories people send in about things that happened to them at shows or how a show just rocked or changed their life or whatever. I always thought they sounded a little exaggerrated and sometimes just plain childish. That said, I have just returned this evening from what I believe was the greatest single rock show I have ever seen. The stories were not exaggerated. Weezer and Jimmy Eat World sound phenomenal live. I really enjoyed the new stuff, (particularly the song entitled, "Living Without You" that one was impressive.) I saw one other thing that I'm not sure if it was planned or just a fortunate accident. There were certain sets of lights that were in the back corners of the stage, aimed out at the sides of the stage at an angle. When these lights locked into a certain position they projected a 30 or 40 ft silohuette of Pat playing drums on the wall on either side of the stage. They were at least as tall as the stage maybe bigger. I wish I had my camera with me. Being a drummer myself it was cool to see the drummer in the "spotlight" whether it was intentional or not. It was quite cool. Enoyed the show, hope you plan on coming back very soon. Long Live Weezer!" --DK

"The show in Fort Worth is really great; the shows get better and better each
time I go. I wasn't too familiar with J.E.W. and T.D. until the show last
night, but they proved to be really good acts. J.E.W. was fun to listen to,
and the guys from T.D. were hilarious. It was awesome when J.B. from T.D.
asked the guy in the audience to throw up the life-size picture of himself
from what I assume was a Shallow Hal promo, and then he started making
comparisons between the way he looked in the picture and the way he does
now. But of course, the best part of the show was WEEZER! The guys had an
awesome set and they played all of favorites from the Blue and Green albums.
I really liked how during Only in Dreams, they turned the lights out except
for the blue lights that allowed you to only see the outlines of the guys;
that was really cool. It was also cool how during the spoken word parts of
Undone, they had the lights going in and out, so you could only either see
Brian or Scott. Speaking of Scott, he gels well with the band. I was
somewhat bitter in the Mikey Days, because I missed Matt, but I think that
Scott fits in well. The show really kicked ass, we had the usual commotion
of fans, like the one who thought it was brilliant idea to get on stage,
getting dragged away by the security guys. Can't wait until I see Weezer
again!" --Kathy

"Last night me and some buddies went to the weezer show in Ft. Worth and lets just say they rocked hard. No three bands should be allowed to put out that much rock. Jimmy Eat World came on and not having heard much of their stuff I thought they kicked some pretty good ass. Then came the D and needless to say my ass is still in the coliseum from having it rocked off by the dynamic duo. They played a really great show and definitely one I'll not soon forget. Weezer came on and played a great show as usual. All those people out there who said they weren't into it and were moping around, not the case at all. they were jamming out with the best of em. My only regret is them not playing longer...well that and losing my ass. anyhow, all in all it was a bad-ass show and one I would have payed double to see. Keep on rocking." --Ryan